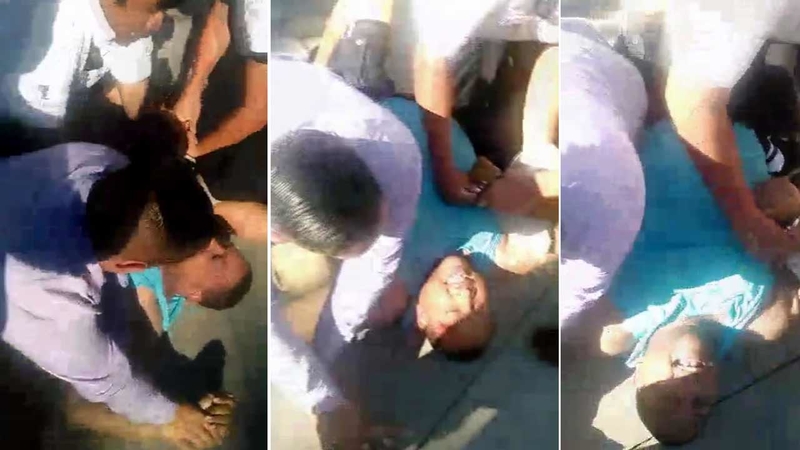 Debbie Bell and her husband Anthony Reedburg say they were celebrating their daughter's 5th birthday, but what started out as a fun day ended in an altercation.

"They keep telling me to flip over and I'm letting them know like I can't move," Reedburg said. "You're on my stomach, you're on my groin."

About an hour-and-a-half earlier, a woman allegedly accused the family of taking her son's sandals in the park's locker room. Reedburg says his son had the same brand of shoes, just six sizes smaller than the other boy.

Soon, he says, a security guard was following him around and repeatedly questioning him.

"We let them know we had nothing to do with it and I feel like they're harassing me," he said.

Reedburg claims he was forced to the ground without warning as his children watched.

"I didn't start recording until they actually jumped on him and then I realized this is really serious," Bell said.

In a statement, Knott's Berry Farm officials say while a security officer was investigating the theft Reedburg "became verbally abusive and was asked to leave the park. [Reedburg] refused to leave and then physically assaulted several of our security staff members, which led to an arrest made by the Buena Park Police Department. We take matters of this nature very seriously."

Reedburg insists he didn't touch anyone and that staff members never asked him to leave the park. When Eyewitness News asked Reedburg if he had been arrested, he replied "no comment."

Reedburg says he suffered numerous injuries, including a cut above his eye, an injured thumb and abrasions to his knees. The family's attorney plans to file a lawsuit and wants Knott's Berry Farm to provide better security training.