Vanessa Bryant said she'll live in fear that the photographs of her dead husband and child will be made public.
KABC
By Marc Brown and Lisa Bartley 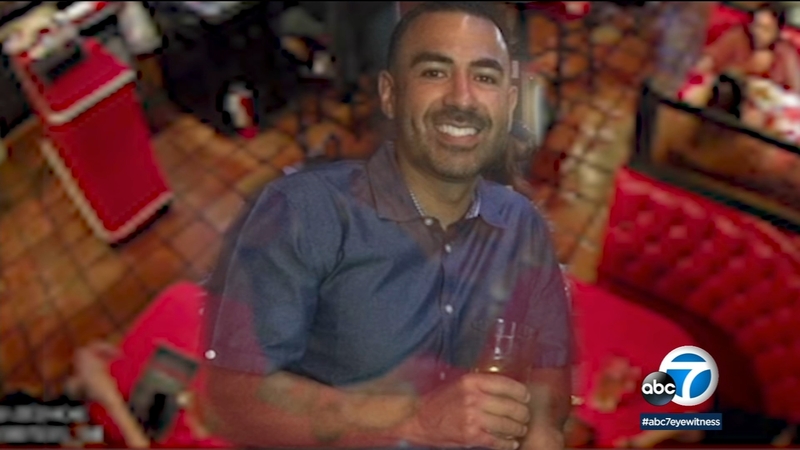 LOS ANGELES (KABC) -- January 28, 2020: It's a typical taco Tuesday at the Baja California Bar and Grill in Norwalk, just two days after a helicopter crash killed NBA legend Kobe Bryant, his daughter, Gianna, and seven others.

Then, talk at the bar turns to the crash.

Security camera footage from the bar that night shows Los Angeles County Sheriff's Department Deputy Joey Cruz with his phone in one hand and a beer in the other.

On the phone are graphic photos of the basketball star's remains from the crash site. After Cruz leaves the bar, the bartender walks over to a booth near the front door and begins talking to a group of regulars. The men were part of a softball league and stopped by the restaurant after a game that night.

Ralph Mendez said the bartender told them that the man who had just left was an L.A. County deputy who had shown him extremely gruesome photos from the crash site.

"He has pictures, he showed me pictures," Mendez said the bartender told the group.

"Pictures of what?" the group asked.

"He began describing what he saw, you know? 'They were all burned,' and he got very graphic with it," recalled Mendez.

The bartender, Victor Gutierrez, later testified in a deposition that the photos were "shocking," and "contained body parts."

Mendez said the bartender told him that Cruz laughed and said he found the photos amusing. Mendez had hoped none of it was true.

"I thought to myself, 'If I don't say something, and it is true, I don't think I'll ever be able to live with myself," he recalled.

Mendez said he immediately thought of his fiancée, who was pregnant with their first child together at the time.

Mendez said he saw a role model in Kobe Bryant, who was a father to four girls and famously called himself a proud "Girl dad."

There were three daughters on board the helicopter that day: 13-year-old Gianna, 14-year old Alyssa Altobelli and 13-year old Payton Chester, who were all on their way to a basketball tournament.

After the Los Angeles Times broke the story that deputies and L.A. County firefighters had shared grim images from the crash scene, Sheriff Alex Villanueva told reporters it was "like a punch to the gut" and that only the National Transportation Safety Board and officials with coroner's office have a legitimate need to take photos of human remains.

"It's wildly inappropriate," Villanueva said during an interview in March 2020. "It's disgusting and it harms people that suffered a tragedy already. On top of that, to think it could be expanded beyond that, by having a public display of their loved ones remains, so this ... we're trying to put an end to this."

Kobe Bryant's wife, Vanessa Bryant, and the other families who lost loved ones that day filed lawsuits over the capture and distribution of the photos.

The Altobelli family along with the family of Christina Mauser, a coach who was also killed in the crash, settled their lawsuits in November for a combined $2.5 million.

However, Vanessa Bryant is heading for trial that could start late next month.

Her attorneys say close-up, graphic photos of Kobe Bryant and possibly their daughter's remains were passed around to at least 28 L.A. County sheriff's deputies and at least a dozen firefighters.

According to court documents, former L.A. County fire captain and media spokesperson Tony Imbrenda showed photographs to several colleagues during a cocktail hour at a Golden Mikes Award Show ceremony a few weeks after the crash.

Another firefighter's wife, who was nearby, reported Imbrenda to the department.

Imbrenda was demoted and transferred from his position.

Former L.A. County fire captain Brian Jordan was facing termination for his role in taking and sharing the photos. He retired shortly after he was notified by the department that he was being fired.

Fire Captain Arlin Kahan was suspended for 30 days with no pay and remains working for the department.

Attorneys for L.A. County argue that Vanessa Bryant's claim of emotional distress is based on "hypothetical harm" because the photos were not "publicly disseminated."

"Two years after the crash that claimed the life of Kobe Bryant and his daughter, the county continues to grieve with Ms. Bryant and the other families who lost loved ones in this tragic accident," Skip Miller, outside counsel for L.A. County, said in a statement.

"The County responded fully to the disaster by sending in first responders-police and fire-to deal with the aftermath and secure the site from intruders, paparazzi and the public. As part of their duties, these first responders took photos of the scene and sent them to their colleagues at the Command Post, as well as officials of the National Transportation Safety Board. And now, two years later, the fact remains that none of these photos have ever been publicly disseminated. Yet the sad irony is Ms. Bryant is suing the County for its actions while there are literally hundreds of crash site photos in the media and on the internet from hikers and bikers in the area, as well as from the media and news copters. We sympathize with her grief but believe her lawsuit is misdirected."

In her deposition, Vanessa Bryant testified that she will live in fear for the rest of her life that the photographs of her dead husband and child will be made public.

She testified that she's not asking for a dollar amount in her lawsuit, but simply wants the departments and individual deputies and firefighters to be held accountable.

According to court documents, Cruz was the only deputy that was disciplined.

Court documents show that deputies Rafael Mejia, Michael Russell and Raul Versales were not disciplined, but instead received what's known as a "performance log entry" in their files.
Mendez, who triggered the entire investigation, said he has no regrets.

"I feel sorry for the families," he tells Eyewitness News. "I really feel bad, and I wish this wasn't happening. My prayers are with them, and yeah, I hope justice is served in all of this. I'd do it all over again. I just think it was the right thing to do."