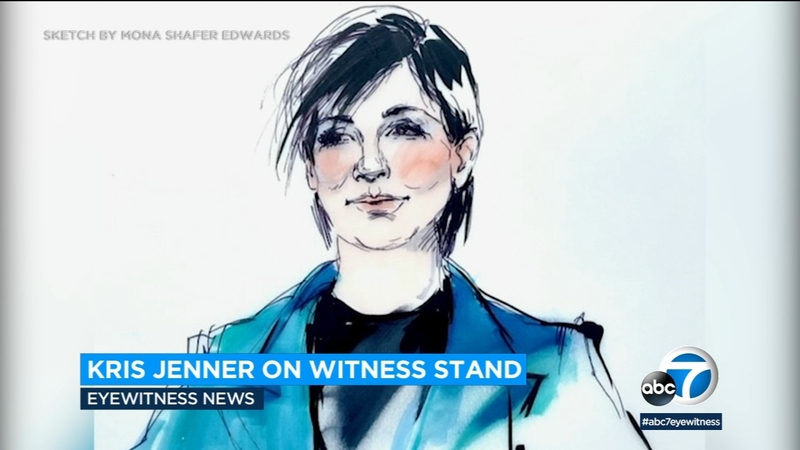 LOS ANGELES (CNS) -- During her second day of testimony Friday, Kris Jenner alleged that Blac Chyna "tried to murder'' her son Rob Kardashian by allegedly putting a gun to his head during a December 2016 fight at the center of a $108 million defamation trial filed by Chyna against four members of the Kardashian family.

"I was told she put a gun to his head and she was drinking ... I can't imagine how that must feel to have a gun pointed at your head,'' Jenner said.

Kris Jenner is a defendant along with her famous daughters, Kim, Kylie and Khloe, in the trial of the 33-year-old Chyna's Los Angeles Superior Court lawsuit.

The complaint alleges the quartet lied when telling E! network executives that Chyna assaulted Rob Kardashian because they wanted the network to cancel a second season of "Rob & Chyna,'' which dealt with the ups and downs of the formerly engaged couple and had already begun filming before the plug was indeed pulled.

Chyna maintains the relationship ended in the summer of 2017, but the defendants say Chyna acknowledged in a written declaration that the two split in December 2016, meaning the second season could not be aired.

Kris Jenner said things took a turn for the worse the night of Dec. 14, 2016, when she learned that Rob Kardashian was allegedly assaulted by Chyna at Kylie Jenner's Hidden Hills home.

Chyna was alleged to have pointed a gun at him, choked him with a phone cord, hit him with a metal pole and ripped open his shirt.

Kris Jenner said things took a turn for the worse the night of Dec. 14, 2016, when she learned that Rob Kardashian may have been assaulted by Chyna at Kylie Jenner's Hidden Hills home.

"She tried to murder him. She put a gun to his head,'' Kris Jenner said. She teared up while speaking about the incident when Chyna's attorney Lynne Ciani asked her why she didn't contact Chyna after Dec. 14, 2016.

Jenner compared the incident to her daughter Kim Kardashian being robbed at gunpoint in her hotel in Paris just weeks earlier, on Oct. 3, 2016.

She said having guns pointed at her children was traumatizing.

"It's not a joke,'' she said, referring to Chyna defending herself from the allegation by saying she was joking by using the gun.

Jenner added that "We didn't create this fabulous life we were handing (Chyna) just so we could take it away.''

Jenner also added that she didn't have influence over E! to pull season two of "Rob & Chyna.''

"I did not have any influence over the E! network,'' Jenner said.

Television producer Jeff Jenkins, who was one of the original executive producers of "Keeping Up With The Kardashians,'' testified that he wasn't surprised E! pulled season two because it is "very difficult to shoot a show ... when they didn't want to talk to each other.''

Blac Chyna testified that she was joking when she put a phone cord around the neck of her then-fiancé Rob Kardashian, and later grabbed his unloaded gun.

"They were just disgusted with each other,'' he added, saying it was hard to get them in the same room, let alone live together.

He added that the first season of the show had "solid'' ratings relative for E! at the time. Producers tried to get Rob Kardashian and Chyna to reconcile and offered to provide a therapist who would visit them in their house, Jenkins testified. He said Chyna refused and he left the conversation thinking the show would be over.

"The premise is two people living together in love,'' he said.

Kris Jenner returned to the stand after Jenkins' testimony Friday morning and was asked about a letter that Rob Kardashian sent to her and all of her daughters, Kim, Khloe, Kourtney, Kendall and Kylie.

In the letter -- which was sent on Jan. 11, 2017, a few weeks after the fight with Chyna -- Rob asks his mother and sisters to let season two move forward.

Kris Jenner said during her testimony that she didn't think Rob wrote the letter himself, saying he never writes her letters and that it doesn't sound like his voice.

"I think he allowed the letter to be sent, I just don't think he wrote it,'' Kris Jenner said. She added that at the time, the couple's relationship was fine one day and not the next.

Kris Jenner and her daughters Kim Kardashian, Khloe Kardashian and Kylie Jenner, are the defendants in the case. All were in court Monday and Tuesday, and all are expected to take the stand.

"They had an option that they didn't exercise ... there's nothing to be canceled,'' Kris Jenner said.

Kris Jenner told jurors on Thursday and Friday that she never considered calling the police about Chyna's alleged threats against Kylie Jenner.

"We just kept it internal within the family because we really wanted to take care of it ourselves,'' Kris Jenner said Thursday.

Chyna maintains she did not harm Rob Kardashian, but admits damaging a television owned by Kylie Jenner and two gingerbread house decorations.

The claim involves what Chyna's court papers call "humiliating and degrading'' photos that Rob Kardashian allegedly posted of Chyna in July 2017. A separate jury will hear that case after the conclusion of the current proceedings.