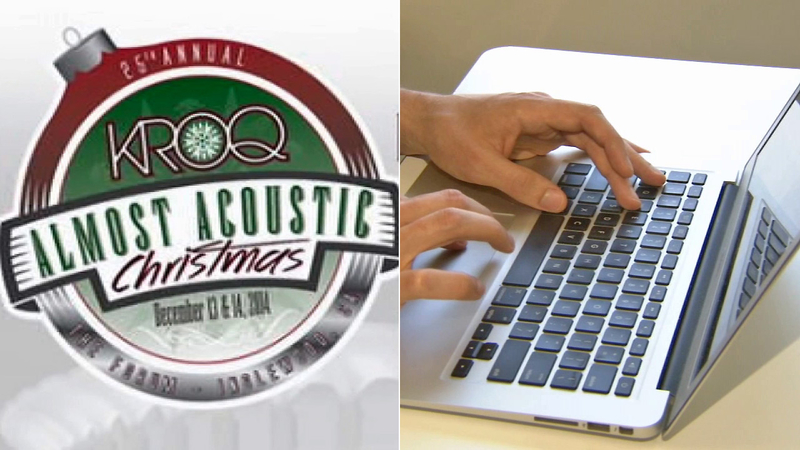 CULVER CITY, Calif. (KABC) -- KROQ's Almost Acoustic Christmas is always a hit, but a glitch in Ticketmaster's system meant sales were one big miss for locals this year.

Bryan Madole sat down at his computer on Friday to buy tickets for KROQ's annual two-night Christmas concert. He had the tickets he wanted, but then was very disappointed.

"They just kind of got taken out of our reach," said Madole. "When I put in the zip code, it told me that my payment was being denied because I was not a California resident, which is crazy because I've lived here for over a decade.

Ticketmaster was supposed to allow only Southern California residents to access the tickets, but instead the opposite occurred.

According to the company:

"There was an issue with the predetermined zip code file and fans were not able to purchase tickets when the event first went on sale."

Almost immediately, angry fans started to vent on social media. The pre-sale event was only open to fans who received a special password.

"In theory the entire reason for checking the zip code was to make it so that the fans and the California locals could go to the concert. Instead I was punished for being a California local," Madole said.

"As soon as we became aware of the issue, we alerted Ticketmaster so they could quickly solve the problem. There will be a number of chances for you to win your way to the show in the coming weeks," KROQ said.

Madole doubts he can ever win tickets. What upsets him is that tickets he could have bought are now available on re-sellers websites for as high $5,900 for a pair.

"I understand they can't re-do it all again, and stuff like this does happen, but it would be nice for them to acknowledge it a little more," he said.