Though Saturday's demonstrations may have started peacefully, some took a violent turn, leaving behind a trail of damage as L.A. businesses were looted and dozens of fires were set.
KABC
By Jade Hernandez 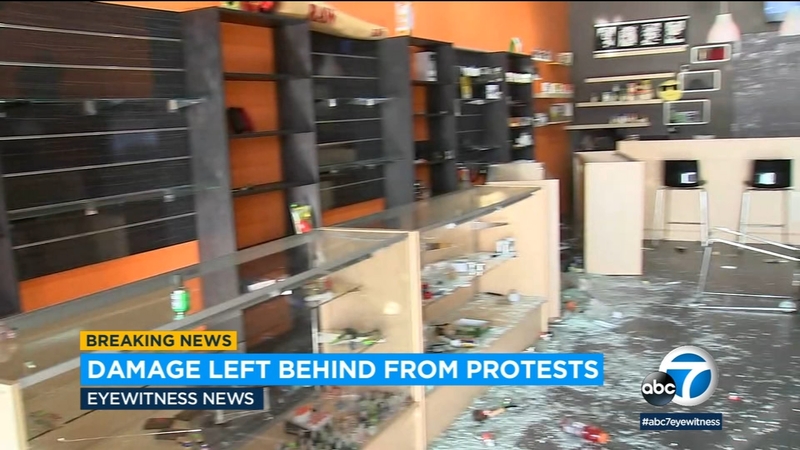 LOS ANGELES (KABC) -- Like many others across the country, people in Southern California woke up Sunday to charred and glass-strewn streets after another night of unrest sparked by the death of George Floyd.

Though Saturday's demonstrations in areas like Fairfax District may have started peacefully, some took a violent turn, leaving behind a trail of damage as businesses were looted and dozens of fires were set. Several police vehicles were also torched, all of which prompted the deployment of the National Guard.

As businesses owners across the region began the process of cleaning up and taking stock of what was left of their storefronts, county Board of Supervisors Chair Kathryn Barger declared a state of emergency in L.A. County in response to the unrest.

Hany Botros, the owner of Smoke and Vape Depot, says his business was among those that were destroyed during the protest. In exclusive surveillance video obtained by Eyewitness News, several individuals could be seen grabbing merchandise from broken shelves inside.

"What's the purpose of destroying something that's not yours?... It's unbelievable," said Botros, who added that he couldn't imagine this happening after being in the area for six years, especially coming out of a 10-week closure prompted by the coronavirus pandemic. A GoFundMe was created to help the smoke shop owner.

One of the hardest-hit areas was the area around the Grove, a popular high-end outdoor mall west of downtown where hundreds of protesters swarmed the area, showering police with rocks and other objects and vandalizing shops. One officer suffered a fractured skull, Los Angeles Police Chief Michel Moore said.

When the rare citywide curfew took effect at 8 p.m., police moved aggressively to get people off the streets and there was no repeat of the late-night rampage that occurred downtown Friday night and led to more than 500 arrests.

In Santa Ana, hundreds of demonstrators converged on the police station, throwing objects and setting off firecrackers as police used tear gas to push them back.