LA County officials to ponder curfew, once again urge against gatherings amid 'dangerous point' in pandemic

L.A. Mayor Eric Garcetti said Monday the situation in the city is "very dangerous" and implored Angelenos to buckle down on safety precautions to prevent further infections and hospitalizations.

As Southern California grapples with a surge in COVID-19 cases, Mayor Eric Garcetti on Monday called the situation in Los Angeles " very dangerous" and implored Angelenos to buckle down on safety precautions to prevent further infections and hospitalizations.

It is believed the possible business curfew would focus on restaurants serving alcohol past 10 p.m.

-In L.A. County, coronavirus cases have doubled in the last month. The mayor called on residents to take actions similar to those at the onset of the pandemic back in March:

-Stay at home as much as possible for the next two to three weeks.

-Assume that everyone outside your household is infectious.

After two straight days of coronavirus case numbers exceeding 3,000, county public health director Barbara Ferrer said she remains hopeful that if residents get back to strict adherence to protocols such as avoiding gatherings, wearing face coverings and practicing social distancing, particularly over the Thanksgiving holiday, such steps may not be needed. But she said health officials will definitely be making recommendations to the county Board of Supervisors "about what to do if we don't get the pandemic back under control.''

"If by us taking individual and collective actions as people and as organizations we don't get it back under control, then we have no choice but to take a hard look at what kinds of restrictions would again limit our ability to intermingle, particularly in those situations where there may be higher risk,'' Ferrer said. "So some of that would be looking at occupancy limits, some of that may be do we need to look at what some other states and some other cities have done in terms of restricting hours of operations. And of course if we continue on a path bound to overwhelm our health care system, we'd have to put back on the table the possibility of Safer At Home. But we're not there yet.''

The county reported 2,795 cases on Monday -- a day when case reports are traditional lower due to a lag in reporting of test results over the weekend. Long Beach health officials announced 130 more cases Monday, while Pasadena reported 16. The new cases lifted the cumulative county total to 342,489 since the start of the pandemic.

Another six coronavirus-related deaths were also reported by the county Monday, raising the death toll to 7,275.

The county has also seen a steady increase in hospitalizations. The number of L.A. County residents hospitalized with the virus surpassed 1,000 on Sunday for the first time in months, jumping from 966 on Saturday to 1,014, then up to 1,049 on Monday.

Although the rate of deaths from the virus has not risen sharply, that number is considered a lagging indicator,'' meaning it tends to increase several weeks after a spike in hospitalizations.

"It is clear that L.A. County is at a very dangerous point in the pandemic,'' Ferrer said.

In 11 of those counties, the state is using what it calls an "emergency brake" dropping the counties two tiers, for example from Orange to the most restrictive, Purple.

Health officials have pointed squarely at gatherings of residents -- either in public or private settings -- for driving the recent surge, which has primarily involved younger residents under age 50.

Ferrer said residents between 18-29 have consistently accounted for a larger proportion of new cases over the last two month, dramatically widening the gap over all other age groups. But while younger people are becoming infected more often, it is older residents suffering the consequences in terms of hospitalizations, she said, meaning young people are becoming infected and passing the virus to older residents who are at higher risk of severe illness.
"This is most unfortunate and it serves as a stark reminder that young people are spreading the virus with disastrous results for our elderly,'' Ferrer said.

Los Angeles County Supervisor Mark Ridley-Thomas reiterated Monday that the county will be discussing the possibility of additional restrictions this week, including a possible curfew for business operations or other restrictions on operating hours.

"While we must not jump to any conclusions before the Board of Supervisors has had time to fully consider all options and listen to input from the public, I trust we will also be prioritizing the need to safely keep the economy open,'' he said. "We must also look for structural ways to remind everyone that the safest place to be right now is at home. Potential options could include instituting a curfew, so businesses do not have to close again, but would instead have limited hours for essential activities.''

"The fact of the matter is, this is a dire warning to all of us. It's an alarm that the cases have spiked so dramatically,'' Hahn told KNX Newsradio Monday. "The suggestion is that we ask our businesses, our restaurants, to close maybe by 10 p.m. so that they don't essentially become bars where people are just sitting around drinking, laughing and talking without their masks on. So it's not a general public curfew for everybody.''

The Board of Supervisors is scheduled to meet in closed session Tuesday.

Los Angeles County is already mired in the most restrictive purple tier of California's four-tier coronavirus monitoring system, placing severe limits on businesses and public gatherings. Based on the surge in cases in recent weeks, the county will be staying in that purple tier indefinitely.

Gov. Gavin Newsom on Monday announced that 40 counties statewide were being moved back to the purple tier in response to a dramatic increase in case numbers. The move means 41 of the state's 58 counties are under the tightest restrictions, up from 13 on Sunday.

LA County to shut down all dining Wednesday amid COVID surge
Newsom, family quarantine after exposure to COVID-19 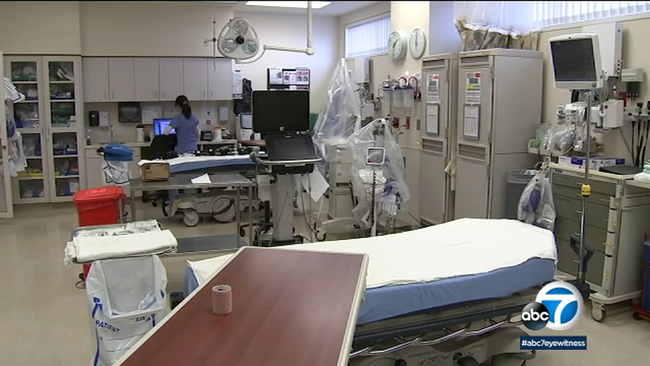 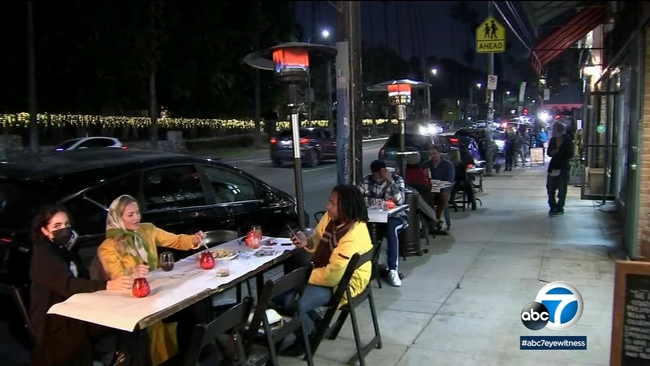