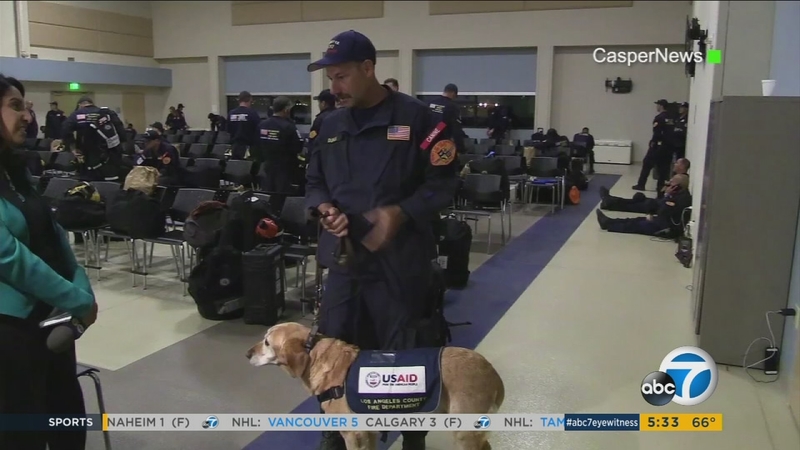 PACOIMA, Calif. (KABC) -- After a formal request from the Mexican government, the L.A. County Fire Department's Urban Search and Rescue team deployed to the earthquake-ravaged country on Wednesday as part of a U.S. agency's assistance effort.

The USAR team officially received the call to deploy on Wednesday afternoon, according to the fire department and a statement from the U.S. Agency for International Development.

Team members had been awaiting the green light after gathering at a staging location in Pacoima.

"Since midnight last night, we've been packing all of our equipment. We have about a semi's worth of equipment packed up, about 55,000 pounds, so we are self-sufficient from anywhere from one day to 21 days. Food, water, medical supplies we may need, and all our tools," said Inspector Joey Marron with the Los Angeles County Fire Department.

The team has practiced for the exact scene that is playing out in Mexico following the devastating quake.

As first responders, they said it was difficult watching news coverage of people digging through the rubble with their bare hands and not being down there to help.

The team said it was also on standby for a possible response to areas devastated by Hurricane Maria, which made landfall in Puerto Rico overnight.

The group deployed one team of 67 members, including firefighters, EMTs, paramedics, a doctor, surgeon and structural engineers. They will comprise a "break and breach" team.

"Any collapsed buildings, they'll break apart those with jackhammers, picks, a lot of hand tools to remove that debris and rescue anyone who needs rescuing and to help search," Marron said.

The magnitude-7.1 earthquake struck Tuesday, which was the 32nd anniversary of the 1985 earthquake that killed thousands.

The temblor collapsed schools, homes and apartment buildings. As of Wednesday morning, the number of confirmed fatalities stood at 217.