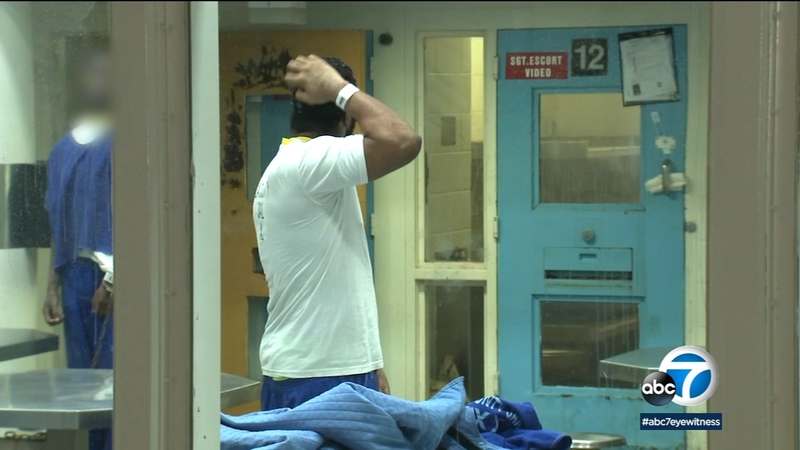 LOS ANGELES (KABC) -- The homeless crisis has sparked much debate about what to do about the widespread problem. It's an epidemic that's doubled in size in the last 4 years, and it's getting worse.

To better understand the problem, experts say it's not the streets we should be looking at, but rather to jail.

At the Los Angeles County Jail, it's a sobering experience.

A frustrated inmate can be heard screaming through a door, "Listen to me! I'm not mentally ill, not on medication, I'm not crazy. I'm not supposed to be here in the first place."

What you see is our society's most difficult challenges.

And people whose lives are hopeless without help.

Lt. John McDonald is the watch commander at the Twin Towers jail.

He takes us into a ward called "intake."

"They were just arrested and taken off the streets," McDonald said.

There are newly arrested inmates, tethered to tables to keep them from attacking others.

"I would say most of the inmates in this module are homeless," McDonald explains. "So that problem we have on the streets directly relates to what we have going on in the county jail."

Sarah Schlotterbeck is one of the clinicians here doing amazing work.

She has the daunting task of helping the inmates.

And she reveals a shocking statistic.

"Everyone probably on this floor is schizophrenic," Schlotterbeck said. "Probably 99 percent have the diagnosis of schizophrenia."

It could be hereditary, but the vast majority of today's schizophrenic cases are the result of drugs.

To look around and see the mental state of the people in this ward is frightening.

In successive cells we see one man screaming he's not suicidal; in the cell next to him is a man standing completely nude. Next to that is a man who has smeared his own feces all over his cell.

This is what living on our streets does.

"I call homelessness in Los Angeles an absolute epidemic of epic proportions because there's 41,000 people living on our streets," said Andy Bales with the Union Rescue Mission.

"Here's 15,000 living in cars and RVs. It's an emergency and an epidemic and it needs to be treated like that."

There are few people who understand homelessness better than Bales. Through the years running the Union Rescue Mission, he has helped tens of thousands of people suffering from homelessness.

But that's not all.

"My own dad experienced homelessness from 4 to 17," Bales said. "They'd end up living in a tent in Azusa Canyon or a garage in Compton. All he could talk about was the shame, embarrassment and devastation of homelessness."

Andy's connection to the cause goes even further.

He rolls up his pants and reveals his prosthetic leg, the result of a tragic turn of events while helping the homeless on Skid Row.

Bales said, "My foot came in contact with feces on the sidewalk."

An infection eventually led to him losing his leg. But it hasn't stopped him.

"I'd often say I'd give up my other leg if we actually address homelessness," Bales said.

He explains the vicious cycle of homelessness and why has it gotten so bad.

"The biggest added ingredient to homelessness the last few years is skyrocketing rents. So even everyday folks fall because they just can't keep up," Bales said.

Once on the streets, he says, it's hopeless and horrible. Loneliness and depression take over.

Cheap drugs are the only escape. And that leads to addiction and mental illness.

"They are destroyed. That is why you see the picture that you see when you visit the jail," Bales said. "Because these folks may be behaving the way they are behaving because they've been destroyed by homelessness."

At the jail, that sense of hopelessness is blatant.

A glimpse of the visitors station says it all.

In other parts of the jail, the visitors station is usually filled with loved ones; family members dropping by to deliver hope and affection to an inmate.

Here, it's empty. There are no visitors.

The people who most need someone to care have been completely abandoned. That is our homeless crisis.

Andy Bales points out that the size of New York City's homeless crisis is similar to the one here in Los Angeles.

But he says New York spends exponentially more money on their problem.

As a result, the vast majority of New York's homeless get shelter and help.