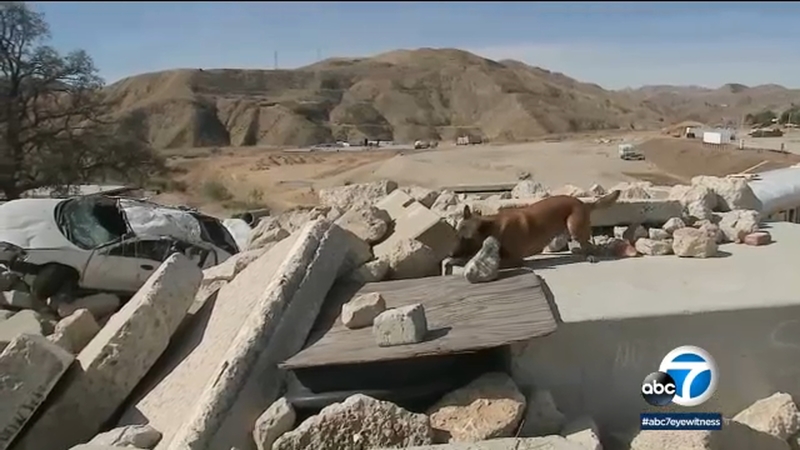 The Los Angeles County Fire Department's Urban Search and Rescue (USAR) team is still relying on lessons learned after the deadly Sylmar earthquake 50 years ago. The 210 USAR team members travel the globe, assisting other states and countries deal with major disasters, each experience adding to a wealth of knowledge they'll rely on when similar trouble strikes in Southern California.

"FEMA (Federal Emergency Management Agency) did a study of all the counties in the nation and, unfortunately, L.A. County was number one for the probability to have the most devastating and dangerous natural disasters," said Los Angeles County Fire Chief Daryl Osby.

Osby talked with Eyewitness News atop the Devil's Gate Dam in La Canada-Flintridge, the oldest of the 14 dams managed by L.A. County. Lessons learned after the 1971 Sylmar earthquake and Northern California's Oroville Dam failure in 2017 have led to strict inspection and maintenance for all county dams.

"We have a lot of confidence that they're safe," Osby told Eyewitness News. "But nevertheless, when Mother Nature is in charge, anything can happen."

That is why after a major earthquake, Osby says one of the first tasks for firefighters would be to inspect dams, freeways and other major pieces of infrastructure for serious damage using Firehawk helicopter crews.

"They can recon areas for us, they can tell us what the areas are that were hardest hit, they can potentially tell us where victims are trapped and then we can get our USAR teams in there," explained Battalion Chief Trey Espy.

Espy heads up the USAR team which is just one of two disaster response teams in the country that renders aid globally, most recently assisting in Japan, Haiti and Puerto Rico.

Responding to earthquakes is a key mission for USAR. It relies on a team of scent dogs to sniff out signs of buried victims. When they get a hit, team members use concrete drills to bore out holes through which tiny cameras can be threaded.

"We can talk to the victim through the camera," Espy explained. "We can also hear the victim and see what their issues may be... and then we deploy our rescue team."

USAR teams don't just rely on their eyes. Often it's some of the quietest sounds that lead them to a victim buried deep under layers of concrete and collapsed buildings. High tech listening devices are able to detect whispers or even gentle tapping sounds coming from people trapped in the rubble.

But despite the technology and equipment, fire officials warn residents need to be prepared to save themselves should a catastrophic earthquake strike.

"(If) there is a mass earthquake and multiple cities are affected, it may take us days to get to you," Espy said. "We're covering 4 million people in the county of Los Angeles, and we have 210 members that are USAR-trained."

Fire Chief Osby echoed that sentiment, urging residents to stock up on emergency food and water supplies as well as learning first aid.

"The firefighters here are the best trained firefighters in the world," Osby said. "If we can't address it, then there's no entity in the world who could do it." But he added: "Something of this magnitude, we might not be able to get there as quickly as we would like to for an emergency incident."
Report a correction or typo
Related topics:
los angeles countysouthern californiaearthquakerescuedisaster reliefdisasterlos angeles county fire department
Copyright © 2021 KABC Television, LLC. All rights reserved.
TOP STORIES
Parents charged in school shooting arrested, plead not guilty
Bellflower residents are assaulted after finding home ransacked
CNN fires Chris Cuomo following suspension, investigation
Air regulators issue violation notices for Carson-area stench
Omicron COVID outbreak linked to Wisconsin wedding: health officials
Redlands burglary suspect arrested, allegedly touched sleeping boy
Hawaii to see blizzard with at least 12 inches of snow
Show More
Suspects in police vests beat, rob LA residents on doorstep
Money found inside megachurch walls possibly tied to 2014 theft
LA smash-and-grab arrests highlight concerns of zero-bail policy
How unusual to charge parents in school shooting? EXPLAINED
Homeowners burn down house in attempt to get rid of snakes
More TOP STORIES News