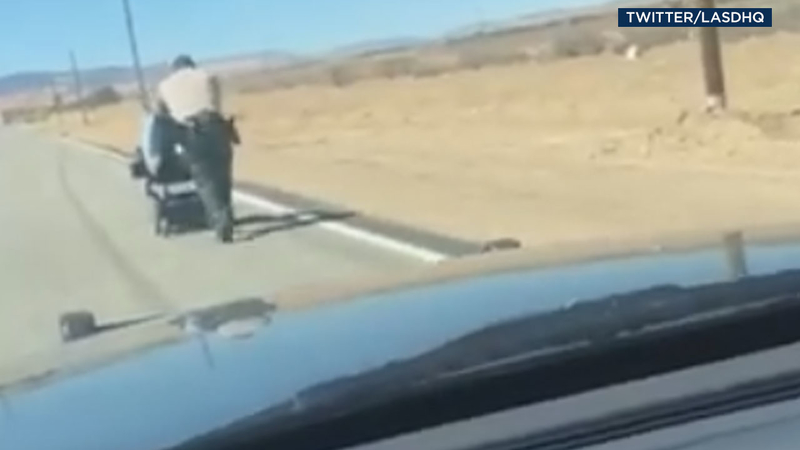 LANCASTER, Calif. (KABC) -- Los Angeles County sheriff's deputies came to the rescue of an older woman who was stranded in the middle of a Lancaster road when her motorized wheelchair ran out of power.

Deputies Chapman and Montanez received a call regarding a traffic hazard while on patrol and headed out to the scene. When they arrived, they found that a wheelchair was in the middle of the road and an older woman was sitting in it.

She said her wheelchair had run out of power, which left her stranded on the road. The two deputies offered her a ride home, but she was upset having to leave behind her only means of getting around. The wheelchair didn't fit in the patrol vehicle because it could not be folded.

That's when Montanez decided to push the wheelchair back to the woman's home, which was about a mile away.

In his full uniform and boots, Montanez was then captured on video pushing the wheelchair back to the woman's home as she and Chapman followed behind in the patrol vehicle.

When an elderly Lancaster woman was stranded as motorized wheelchair lost power @LANLASD Deps Chapman & Montanez gave her a ride home. But that didn’t help with her wheelchair. That’s when Dep Montanez stepped in, pushing her chair back to her home! https://t.co/Ry68rYkGUA pic.twitter.com/7vd8yqTOSp