Despite some reports circulating online implying that an armed carjacking suspect arrested in Lynwood could be the wanted gunman in an attack on two Los Angeles County sheriff's deputies in Compton, authorities insist no suspects have been identified.
KABC
By John Gregory 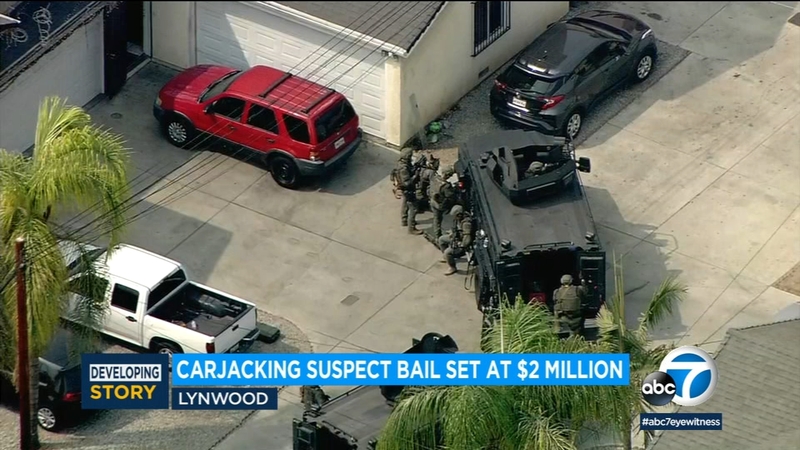 COMPTON, Calif. (KABC) -- Despite some reports circulating online implying that an armed carjacking suspect arrested Tuesday in Lynwood could be the wanted gunman in an attack on two Los Angeles County sheriff's deputies in Compton over the past weekend, authorities insist no suspects have been identified.

Sheriff Alex Villanueva was asked why that suspect -- Deonte Murray, 36 -- was being held on $2 million bail, and if he was connected to the deputies' shooting. The sheriff did not directly address the latter part of the question.

"(He) was arrested for assault with a deadly weapon, and carjacking,'' Villanueva said. And he actually shot the victim with an AR-15, and stole the vehicle. So that, itself, is going to necessitate the higher bail. And he is (an) extremely dangerous person, and thankfully, he was arrested without incident -- without, at least, anybody being injured."

Los Angeles County Sheriff Alex Villanueva provides Eyewitness News with the latest details on the search for the gunman who wounded two deputies in Compton.

"We continue doing a very wide-scale search and investigation on who is responsible for the ambush, and we're chasing all leads,'' Villanueva said. "And right now, it's a lot of work we have to do; and we're not taking anything for granted.''

Meanwhile, Villanueva said Tuesday investigators have "promising leads'' in the search for the gunman who opened fire on the deputies as they sat in a patrol SUV at a Compton Metro station on Saturday.

"We're on the right path,'' Villanueva said. He also expressed hope to have something to announce soon.

A group gathered Thursday morning for a prayer vigil for both deputies outside of St. Francis Medical Center in Lynwood. The 24-year-old male deputy wounded in the shooting has been released while the 31-year-old female deputy remains in the hospital.

"He has a long road ahead for recovery. But he's not alone. We, as a community, are in this together,'' Villanueva wrote on Twitter Wednesday. An update on the wounded female deputy was not released.

"We're trying to see if we can transfer them to a place where they can get long-term care, but we obviously have concerns about the COVID and security concerns, so that's going to be an ongoing issue that we are going to have to address,'' Villanueva said earlier in the day.

Their names have not been released, but both were sworn in just 14 months ago.

The prognosis for both deputies is good but they have a long road to recovery.