Los Angeles food banks and other nonprofits are struggling to keep up with the massive demand for food amid the economic slowdown caused by the coronavirus pandemic.
KABC 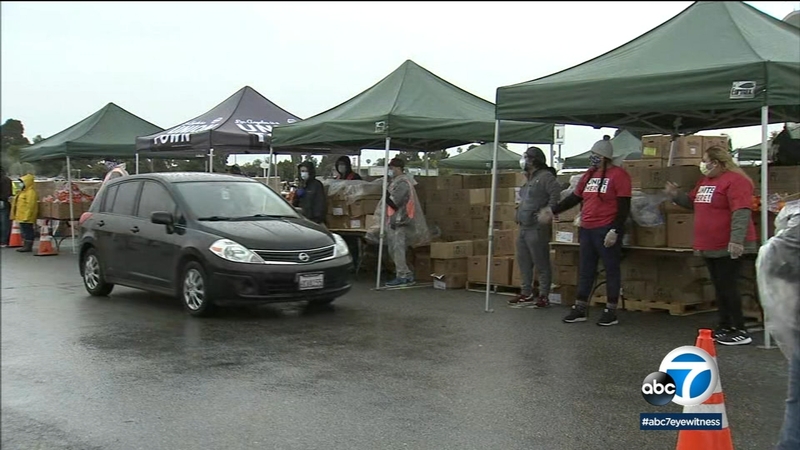 BREA, Calif. (KABC) -- Unemployment has skyrocketed because of the coronavirus crisis. Families who were already struggling are now turning to food banks for survival.

Many families were lining up just for bread at a drive-through station set up Monday morning in Brea.

Over the weekend, Second Harvest saw demand surge at the Honda Center in Anaheim. The previous week the group loaded up 4,198. This week - 6,127.

In Compton, so many smaller nonprofits are struggling to help people.

"There were hundreds of people, these people have children in their cars. And, it was like 'oh my God,' we ain't never seen anything like this," LaWanda Hawkins said.

In San Pedro, Hawkins heads Justice for Murdered Children - like so many neighborhood local food shelves depending on the major food banks and donations for their groceries.

The L.A. Regional Food Bank did not expect this - nearly 10,000 families helped at two giveaways last week, including one at The Forum. Three million pounds of food were given away.

"And when we look at that 3-million pound distribution number compared to this time last year, that's more than double. So that's also an indication of just how much need is out throughout the communities of Los Angeles county," said Michael Flood, president and CEO of the LA food bank.

The Salvation Army has seen a similar surge.

"So we have seen at the Salvation Army about a 75% increase in the food demand for our services," Salvation Army's Robert Chamness said.

The major food banks say they must now tap into their cash reserves to buy groceries because donations from food suppliers are drying up.

LaWanda Hawkins says an email notified her the regional food bank is cutting back what they will give her nonprofit.

"I'm gonna have to come up with something else. I just looked at the email before I talk to you all. As soon as I get off with you I'm going to get on my knees and start begging," Hawkins said.

The need is hitting hard in many communities. In Brea, state Sen. Ling Ling Chang focuses on seniors and students.

"For now this economic impact I think is just stunning people. And they're trying to figure out, 'OK how do I adjust and what do I do to feed myself and my family,'" Flood said.