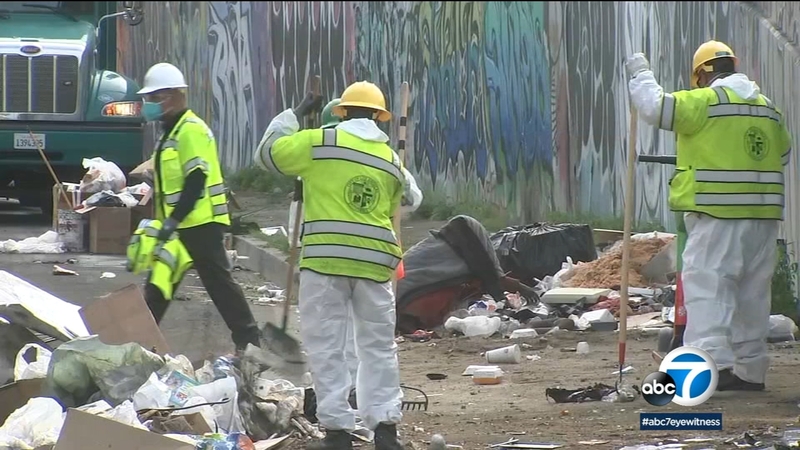 LOS ANGELES (KABC) -- It's something, that to many of us would seem unthinkable, a woman found sitting by herself, among piles of trash.

What started out as a story about illegal dumping turned into something else as Los Angeles City Councilman Kevin De Leon spoke about the tons of illegal trash being dumped on city streets.

That's when a woman was spotted in the trash that was about to be cleaned up. When she started crawling around an Eyewitness News photographer asked the councilman to check on her.

"OK Betty, I'm going to have someone bring you some food, and some water," said De Leon.

De Leon pointed out that there are a lot of people like Betty, living on the streets of L.A., in dire, unsafe, and often filthy, conditions.

"You have an individual here, this woman, who's severely mentally ill, you know, who needs help desperately," said De Leon. "Aside from housing, stabilize her life and put a roof over her head so she could be in a safe environment other than sleeping in a tent that has a flimsy zipper to keep her safe, or a cardboard box that collapses quite easily if someone wants to attack her. She needs to be In a safe place."

The councilman was near downtown L.A. for a press conference to discuss his "Clean Streets Now" plan that would expand L.A.'s Bureau of Sanitation's effort to pick up trash that's been dumped illegally.

There's a large homeless encampment just a few feet away. De Leon says his district has the largest number of homeless in the city, and cleaning up these streets is just one step.

"When you have someone who's, you know, half-naked or naked, running down the street, with feces caked onto their skin and screaming and yelling at the top of their lungs, this is not unique," De Leon said. "We know it's a daily occurrence throughout the city of L.A., that individual is not well. That individual needs help. But if they continue to stay on the streets or be left on the streets as if they're white noise, that they're the natural landscape of the city of L.A., it's horrific."

Budget talks for the city have begun. The Bureau of Sanitation is asking for more money to create more teams to clean up illegal dumping.