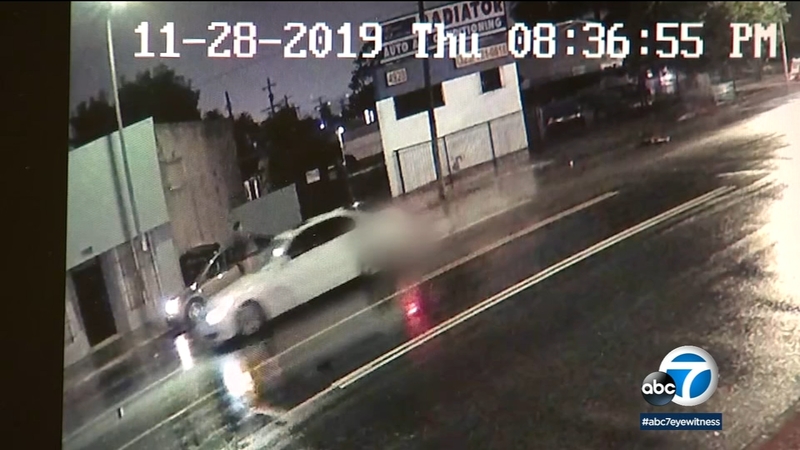 JEFFERSON PARK, LOS ANGELES (KABC) -- A man died after being struck by three separate drivers on Thanksgiving night - and not one stopped to help.

Police are pleading with the drivers to come forward - in particular a woman who dragged his body for more than half a mile before getting out to look at what she struck.

Surveillance video shows the man standing in the street near a marked crosswalk at Adams Boulevard and West View Street in Los Angeles. It was around 8:30 p.m. on Thanksgiving.

First a car, possibly a white Audi A5, slams into him, sending him violently to the ground.

A few seconds later another vehicle, possibly a Cadillac Seville, ran over the man as he was on the ground.

A good Samaritan stops to help and calls 911.

Then a third car, possibly a Ford Focus, strikes the man and drags him for several blocks.

Additional video shows the driver, an elderly woman, pull into a gas station at Adams and Crenshaw Boulevard.

She exits the vehicle and sees the body. Then a young passenger gets out of the car to look. Next the driver is seen backing up and leaving, dislodging the body and leaving him on the ground in front of the gas station pumps.

"At the point she backs up, there's no doubt that they confirmed there was a human being," said Det. Ryan Moreno with LAPD's South Traffic Division.

Friends have made a makeshift memorial to him at the crash scene. Friends also say Muhammad's mother had died one year ago.

He went by the nickname "T-Shirt" - he was known for designing and selling shirts for many years.

Police say he survived cancer 5 years ago, had fallen on tough times and was living on the street.

By leaving the scene the driver turned what was likely an accident into a criminal investigation, Moreno said.