All five candidates were asked whether they support his bid for reelection. Bass was the only one who said no.
KABC
By Josh Haskell 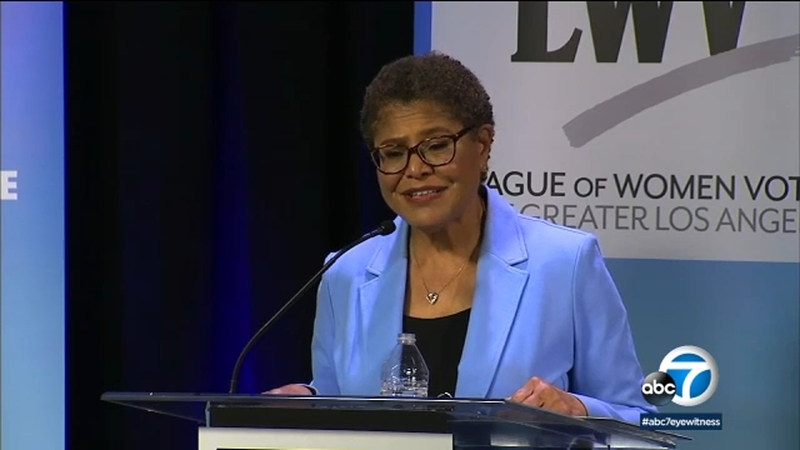 LOS ANGELES (KABC) -- Developer Rick Caruso, who's loaned his campaign for mayor of Los Angeles over $22 million with over a month to go until the primary election on June 7, took incoming fire from the other four candidates on stage Sunday night during ABC7's mayoral debate hosted at Cal State Los Angeles in partnership with the Pat Brown Institute and League of Women Voters.

"Personal attacks seem to cloud the responsibility that people want to take like yourself," Caruso told De León.

"Rick, you're the only one on this stage that actually has the personal wealth and resources to build affordable housing and as far as I know, I don't think that you have built any affordable housing," she said.

The candidates all said they would improve the relationship between the city and county when it comes to tackling homelessness just days after the head of the Los Angeles Homeless Services Authority (LAHSA) resigned in frustration.

"In the county of 88 cities, the city of L.A. has had weak no-camping laws, so of course they all come to our city," said mayoral candidate and L.A. councilman Joe Buscaino.

"I think we should be having elected officials serving on it," said Feuer.

Bass believes both the city and county have attempted to reduce homelessness, but "have not made the commitment to end it."

"This is the United States of America, Los Angeles, California, and we are not going to allow our people to continue to die on the street," said Bass.

Caruso then explained how he would address the rise in violent crime.

"Good policing is all about community policing," he said. "It's what I did 20 years ago while president of the police commission along with [former L.A. police chief Bill Bratton.] You have to build trust between the officers and the community, and that means community policing and senior lead officers."

All five candidates were asked whether they support L.A. County Alex Villanueva's bid for reelection, and all of them said they hadn't made a decision, except for Bass, who said no.