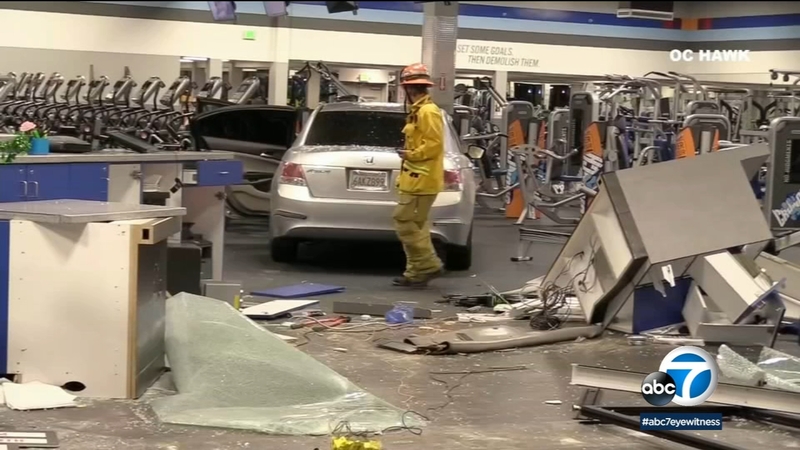 LA MIRADA, Calif. (KABC) -- A man was arrested for attempted murder after a stolen car slammed into a 24-hour gym in La Mirada early Tuesday morning, and authorities are investigating the possibility that the crash was intentional due to a grievance held by the former member.

The vehicle smashed through glass at the front entrance of a Crunch Fitness in the 12800 block of Valley View Avenue about 2 a.m., according to the Los Angeles County Sheriff's Department. The gym was open at the time, but no injuries were reported.

Surveillance video shows an employee running to safety a split-second before the Honda sedan comes barreling into the building and smashes the front counter.

"This guy just started revving his car and at the end he put it on drive and he let the car go. It was going pretty fast," said witness Adrian Nolesco, a gym member who said the incident appeared to be deliberate. "He rolled out and he started running towards Imperial Highway."

Deputies found the driver in his own vehicle about 2 miles from the scene and took him into custody, the Sheriff's Department said. He was identified as Sergio Reyes, 32, of Whittier.

One employee said Reyes had been a member of the gym for about three weeks before his membership was canceled due to his alleged stalking and harassment of female members. According to the employee, the suspect had threatened to fight gym staff after the cancellation and was upset while awaiting a $70 reimbursement.