"The devastating aftermath still has tendrils that reach out and touch us today," said Mayor Eric Garcetti.
KABC
By Sid Garcia 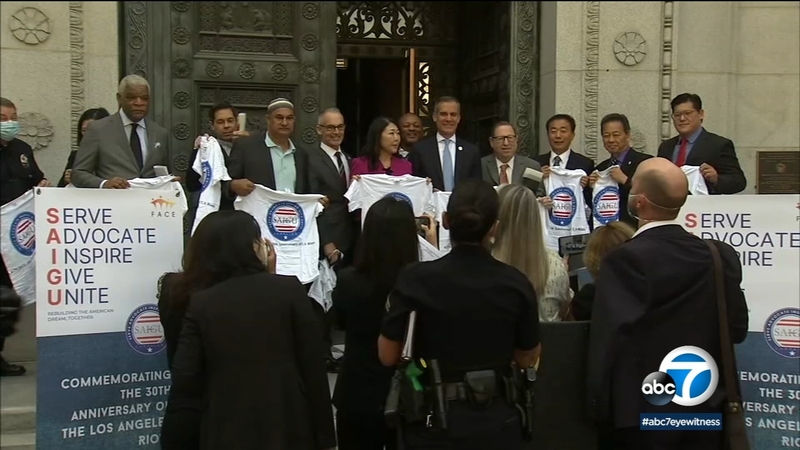 Outrage over a jury's verdict led to violence and increased racial tensions across the city. Now, a campaign is underway to invest in areas that were hit hard decades ago in an effort to continue the healing process.

In April 1992, emotions erupted in the city of Los Angeles after the officers involved in the Rodney King beating were found not guilty. After days of looting and destruction, more than 2,000 businesses were destroyed.

The uprising caused more than $1 billion in damage and more than 60 people lost their lives.

"The devastating aftermath still has tendrils that reach out and touch us today," said Mayor Eric Garcetti. "We still feel the sting of racial injustice, of prejudice, of the difficulty of running a small business."

The Korean-American term saigu, which translates from 4-29, is the name of the campaign to continue the healing not only between the Korean and African American communities, but the entire city of L.A.

Julius Robinson lived through the Watts rebellion in the 60s along with the L.A. uprising.

A banker by trade, he said one of the best ways to heal is through economic investment in areas that were hit hard, such as Normandie and Florence Avenues.

"If we're able to build the economy and everybody can participate in the wealth dream of America, than I think we're really at a point where we can start bridging some gaps," he said.

Community activist Hyepin Im agrees. She adds there's still a lot of healing that needs to be done.

"In the place I believe between Korean store owner, Asian store owner and Black customers, I think that is a place that needs to still be resolved," she said.