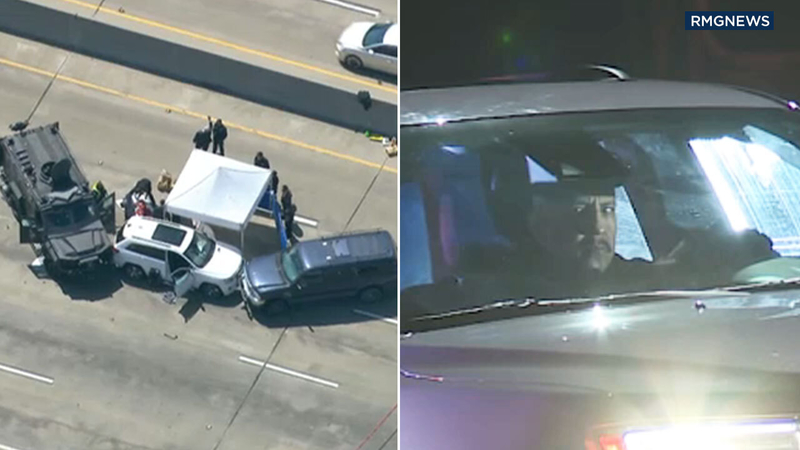 FULLERTON, Calif. (KABC) -- The suspect who killed two people and injured a third person during a shooting spree at five different locations in Los Angeles Tuesday has been identified as a 50-year-old man, but a motive remains unknown.

Carlos Lopez-Melendez was killed during a standoff with police after a lengthy chase that ended on the 91 Freeway in Fullerton.

Officers in police vehicles blocked in the white Jeep Cherokee around 4 a.m. near Raymond Avenue, and the suspect was shot by police at least once after allegedly opening fire on officers.

The shootings - which occurred in the span of about 30 minutes just miles apart - appeared to be random in nature, according to Lt. Raul Jovel of the Los Angeles Police Department.

"These appear to be random acts of violence ... we have no idea what precipitated this,'' Jovel said at a news conference near where the pursuit ended. "We'll be going back to the suspect's home, talking to family members, trying to figure out what led to these acts of violence.''

The terrifying shooting rampage began around 1 a.m., when a man was shot and wounded in the downtown Los Angeles area, Jovel said. The wounded man, who is expected to survive, gave authorities a description of the suspect's vehicle, Jovel said.

About 25 minutes later, a man was shot and killed while sitting in his car near Figueroa and 28th streets, according to Jovel. Family members told reporters at the scene that the victim, a 25-year-old newlywed, was in a drive-thru line at Starbucks with his wife, who wasn't injured.

Surveillance video captured the suspect driving up to the side of the victim's vehicle, a blue Mustang, and opening fire moments later. The victim's wife can then be seen in the footage running for help.

A 24-year-old newlywed and a father of two young children were the victims killed in an overnight shooting spree in Los Angeles.

The man in the Mustang who was killed was later identified as Alexis Carbajal. His family says he was newlywed.

"About 15, 20 minutes later, there was another male that was shot near the area of Seventh and Figueroa (streets),'' Jovel said.

That man died, Jovel said. A black Escalade was found with bullet holes in the passenger and driver's side windows.

The Escalade driver was later identified as Zhu Mingzhi, a 42-year-old man from South Pasadena who was believed to be working as a rideshare driver.

A GoFundMe says Zhu worked for Uber and was the sole provider for his family. He is survived by his wife and his two children, an 8-year-old son and 2-year-old daughter.

"The officers quickly discovered that it was the same shooting suspect description -- a male in a white Cherokee,'' Jovel said. "That information was immediately put out ... to all patrol units.''

Patrolling officers saw the vehicle and began chasing it about 1:45 a.m., Jovel said.

The pursuit lasted nearly three hours, often at slow speeds, traveled along the 60 and 57 freeways before coming to an end on the westbound 91 Freeway near Raymond Avenue at about 3:25 a.m.

At one point, the Cherokee pulled up alongside a Tesla on the freeway and the suspect fired a single shot, shattering the back window of the Tesla.

Seth Jones, the driver of the Tesla, captured the shooting on camera. He says the bullet hole came dangerously close to his head rest.

"I just thought this was it, I don't know," Jones told Eyewitness News. "He shot and my back window exploded. And I just drove away. I drove as fast as I could. I called 911 and they told me to take the nearest exit."

"I'm just so grateful to be alive," he added.

A short time later, the suspect's vehicle was disabled by spike strips and two LAPD armored BearCat vehicles were able to pin the Jeep in on the 91 Freeway.

AIR7 HD was over the scene as officers appeared to be deploying tear gas into the suspect's vehicle around 4:45 a.m.

The suspect allegedly opened fire on officers and officers returned fire, authorities said. The suspect was declared dead at the scene.

The scene remained active for hours after the incident, with all westbound lanes of the 91 Freeway shut down during the investigation and traffic backed up for miles.

The Cherokee was towed from the freeway later in the afternoon and the westbound lanes were reopened just after 3 p.m.

A handgun was recovered at the scene, police say.