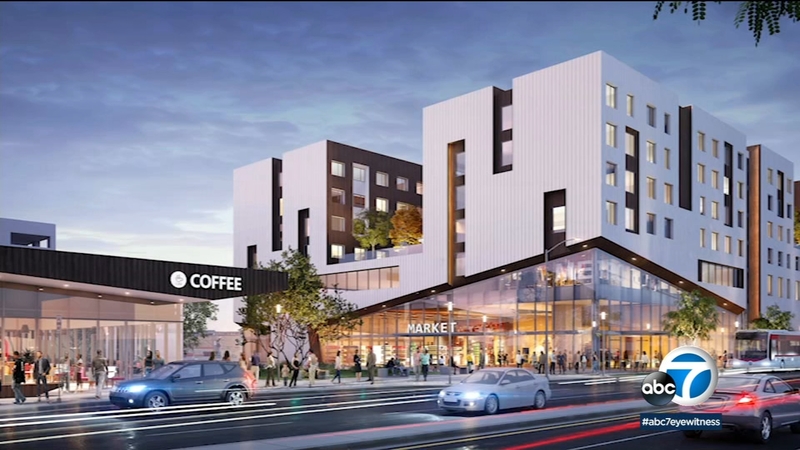 At the intersection of Vermont and Manchester avenues, a lot that was set ablaze almost 30 years ago has remained abandoned.

"I saw this lot burning April 29, 1992. And that began the downward spiral of economic development and economic investment in this neighborhood," said Mark Wilson, who grew up in South L.A. and is part of the Coalition for Responsible Community Development.

He recalls the area was a place where his family and neighbors shopped.

After the unrest in 1992, the four-acre lot at Manchester and Vermont sat vacant - a blight on the community. But now it's rising out of the ashes.

"Now we're excited because a school is being built here," said L.A. City Councilman Marqueece Harris-Dawson. "This is going to be a one-of-a-kind boarding academy for high school students going into the transportation trades. Very good jobs, very good demand in Southern California."

The county seized the land from the previous owner in 2018. That owner had promised, but failed, to develop the land for decades. Multiple groundbreakings went nowhere.

"At this site, over the last 10 to 15 years, I've been to three groundbreakings," Harris-Dawson said.

"The person who owned this land previously to this was extremely well heeled, extremely wealthy, could've easily done a development and just didn't," the councilman added. "It was emblematic of the kind of disrespect that the community is often on the receiving end of."

Friday marks a big step in returning the land to the community - a real groundbreaking.

There will be affordable housing, retail and a grocery store.

"The main thing that was asked for this development was that we get healthy food options, including a healthy, affordable and accessible grocery store," Alvarez said.

The Evermont Project, as it's known, is coming together now through the work of city and county leaders, and developers who aren't afraid to invest in South L.A.

"A lot of people look at our inner city communities as places where there is no economic opportunity, where there's too much crime, where the people are not deserving of quality, and it's actually the opposite," said Leandro Tyberg of Primestor Development. "We think these urban properties are the most meaningful investments we can make."

"To actually be part of the development team, to actually see it rise again and rise in a much bigger and more powerful way to support our community... It's very heartwarming in a real sense, because I'm not just a developer coming into this neighborhood," Wilson said. "I'm a developer from this neighborhood doing a great project that's going to benefit the neighborhood and the people that I grew up with."