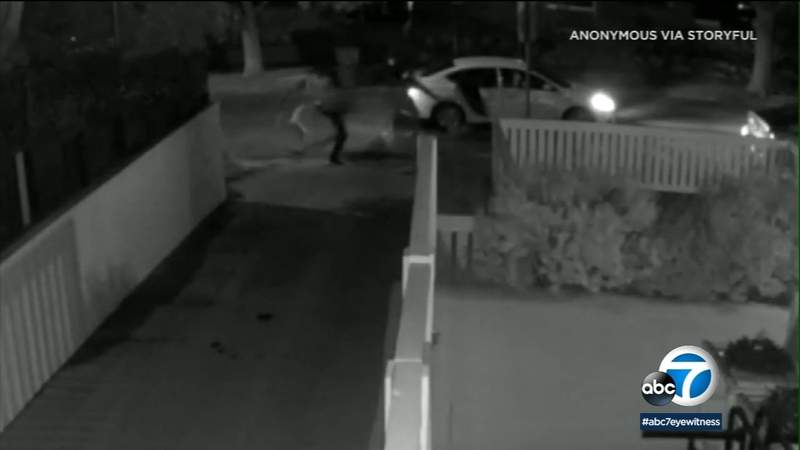 In the aftermath of the shooting, Lady Gaga -- who is reportedly working in Italy this week -- offered a $500,000 reward for the dogs' safe return, "no questions asked."

The victim, identified by his hairdresser as Ryan Fischer, was walking the dogs when the shooting happened around 9:40 p.m. in the 1500 block of North Sierra Bonita Avenue, according to the Los Angeles Police Department.

Paramedics arrived to the scene and rushed Fischer to the hospital. He appeared to be alert and talking to first responders.

While Fischer was being treated on the sidewalk, he was cradling a third dog close to him, video from AIR7 HD showed. Another man was later seen removing the dog from Fischer's arms to comfort it.

Disturbing home surveillance video of the incident shows two people exit a light-colored car and approach Fischer, who loudly screams for help as one of the individuals appears to try and take the dogs from him.

At one point during the physical struggle, one shot is fired and the suspects flee the scene in what police described as a white Nissan vehicle. A detailed description of the shooter was not available.

Fisher is being treated at Cedars-Sinai Medical Center and is recovering well, according to a representative for Lady Gaga.

Eyewitnesses described the incident to ABC7.

"I saw a white car with doors open and a gunshot. I immediately ran," said one man.

Steven Lazaroff, Fischer's hairdresser, was shocked to after hear the suspects took off with two of the dogs, Koji and Gustav.

"I'm not sure if those people knew whose they dogs were, and it's even more devastating the dogs' mom just landed in Rome yesterday to start filming for a movie and she can't even be here," said Lazaroff.

Dennis Volochkov said he was one of the first to run to help Fischer and stayed by his side until paramedics arrived. He identified himself as the person who tried to comfort Miss Asia, who he says was shaking and covered in blood.

"He was holding it so close... It was his responsibility, like his baby. It almost felt like I was prying it out of his hands," he said.

An LAPD spokesperson on Thursday said investigators have been unable to speak with Lady Gaga or her representatives to independently confirm that the dogs are owned by the singer.

The spokesperson noted that French bulldogs are in currently in high demand and are a very valuable breed. Other thefts of French bulldogs have been reported recently in Los Angeles and it was unlikely that Lady Gaga was specifically targeted, police said.

LAPD described two of the suspects that exited the car as men between the ages of 20-25. The armed suspect was described as having blond dreadlocks and wearing a black hoodie. The other man had on dark clothing.

While the LAPD investigates if this was pre-planned or random, locals say something like this hasn't happened before.

"I walk the street every single day, multiple times a day. Thank God it wasn't me," one man said.

Another man said the dogs should be returned.

"Somebody got shot over dogs. Come on man...that's not OK. Bring the dogs back. I don't care if they're Lady Gaga's dogs or whoever, those dogs are freaked out. Give the dogs back. It's not cool," he said.

Anyone with information about the whereabouts of the singer's dogs is asked to email KojiandGustav@gmail.com.

The owner of five puppies said his family was devastated after discovering their bulldogs were gone Monday afternoon.