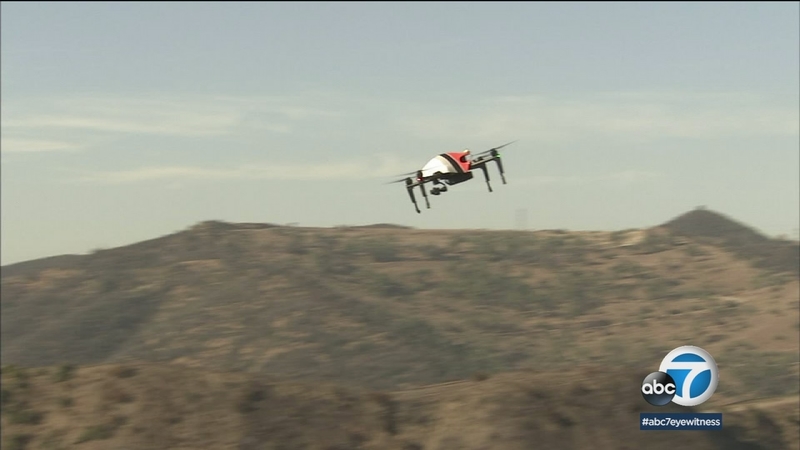 The high-definition video they capture is sent to a battalion chief's vehicle in real time. The Los Angeles Fire Department Foundation has raised money to buy a handful of drones so far as a pilot project.

A drone, equipped with an infrared camera, checked for hot spots during the Skirball Fire and measured the temperature. The unmanned aerial system is cheaper to fly than a helicopter and can quickly give the incident commander a first-hand look at what's happening, instead of getting the information over the radio.

"I can get a helicopter in the air, but I can't get what they see immediately either. So this fills that gap in providing me a picture, which is obviously worth a thousand words at all times of what I'm dealing with" said Battalion Chief Richard Fields.

Firefighter Dave Danielson, who pilots the drones, says they could also be used to look for a victim during a swift water rescue and search and rescue operations in the Santa Monica mountains.

"Most people are out there with their cell phones and we can get a lat-long off that, the drone can vector in on where that cell phone is located. That gives us an immediate awareness and help direct resources out there," said Danielson.

ABC7 has decided to remove the comments section from stories. We believe very strongly that our audience should have an opportunity to discuss and debate events in our world; however, we have not been able to moderate the comments as well as we would like. Instead of hosting a platform that could allow a few loud and ugly voices to dominate a conversation, we want to encourage everyone to join us on our social media platforms and speak out there.
Facebook: facebook.com/abc7
Twitter: twitter.com/abc7
Report a correction or typo
Related topics:
los angeleslos angeles countybrush firewildfirelos angeles fire department
Copyright © 2022 KABC Television, LLC. All rights reserved.
TOP STORIES
EDD director resigns after just over 1 year in charge
New California bill seeks to combat illegal street racing in SoCal
Santa Monica street vendors claim city racism
OC man arrested for allegedly molesting teen girl he met online
California says most halted disability claims are fraudulent
Woman who molested 10-year-old as teen sentenced to juvenile facility
Rams host pop-up newsstands for fans ahead of NFC Championship game
Show More
Pope denounces fake news about COVID, vaccines, urges truth
'E.T. Park' may soon be a reality if Porter Ranch gets their way
LA County appears to have passed peak of omicron surge, officials say
Diego Verdaguer, Argentine singer-songwriter, dies of COVID at 70
Widow delivers heart-wrenching eulogy for NYPD detective
More TOP STORIES News