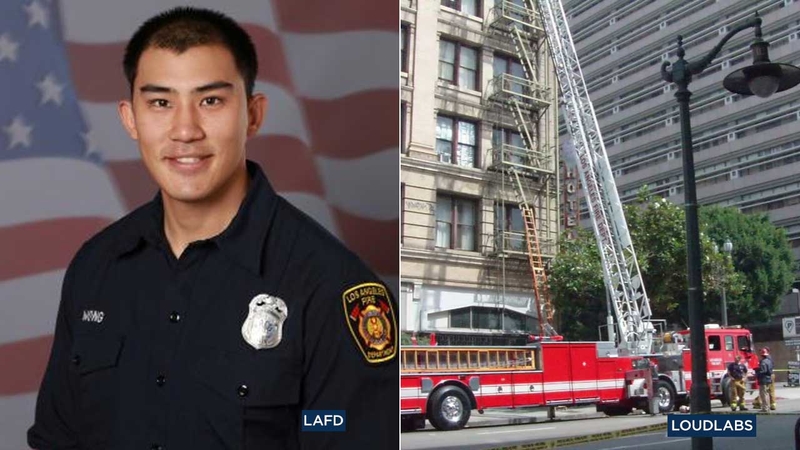 Firefighter dies after fall from aerial ladder in downtown LA

"The LAFD is heartbroken to announce the loss of one of our members, Firefighter Kelly Wong," a two-year veteran of the department, according to a news release.

The incident occurred about 9:43 a.m. Saturday in the 300 block of Main Street. Wong, who suffered numerous blunt-force trauma injuries, was treated by his fellow firefighters at the scene and transported to a nearby trauma center.

The critically injured fireman was rushed into emergency surgery upon arrival at the facility.

Today the entire @LAFD family mourns the tragic loss of Firefighter Kelly Wong. Gone too soon. His family is in our thoughts & prayers.

"Despite the heroic efforts of doctors and nurses at the hospital, Firefighter Wong succumbed to his injuries early Monday morning," the LAFD said in a statement.

A procession was held as Wong's body was taken from the hospital to be laid to rest Monday. Wong's widow, Danielle, and his infant son Colton were seen being comforted by Los Angeles Mayor Eric Garcetti while surrounded by firefighters.

An American flag was held aloft by the ladders of two LAFD engine trucks as Wong's body was moved.

"He was strong, he was brave, he was smart, he was hard-working. He was a hero in every sense of the word," Mayor Eric Garcetti said.

In emotional remarks following the procession, Garcetti called Wong "A hero for our city, a hero for this department and a hero for his family."
According to Garcetti, Wong graduated with top academic honors from the LAFD Recruit Academy in August 2015 and was assigned to the Rancho Park station at the time of his death.

"He was strong, he was brave, he was smart, he was hard-working. He was a hero in every sense of the word," Garcetti said.

Wong was scheduled to transfer to Fire Station 9, which serves downtown and Skid Row, on June 12, and was working out of that station on Saturday when the accident occurred.

Terrazas thanked Wong's fellow firefighters for their immediate swell of support after the accident. Firefighters flocked to the hospital and did whatever they could to make sure operations were maintained while Wong received care.

"I've told the family that they're not alone," said Terrazas.