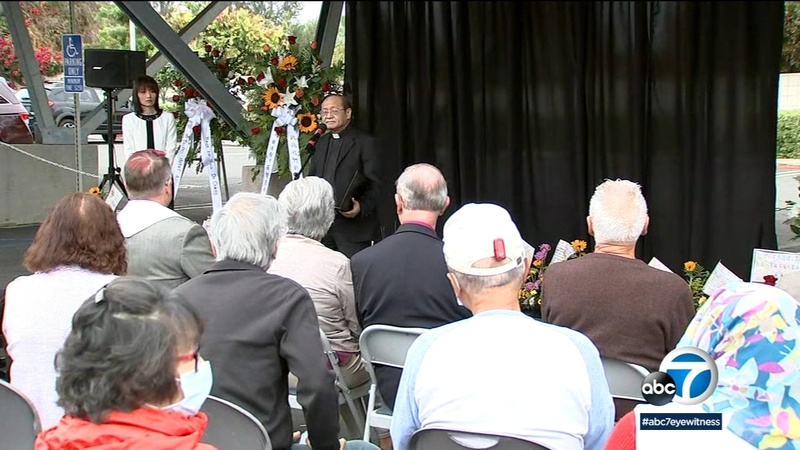 LAGUNA WOODS, Calif. (KABC) -- The Orange County church targeted by a gunman on May 15, began the healing process on Saturday with a ceremony honoring the victims and the doctor hailed as a hero.

Local elected officials and religious leaders gathered at Geneva Presbyterian Church in Laguna Woods where a gunman targeted this Taiwanese congregation. Investigators say the attack was a "politically-motivated hate incident."

The sheriff added that 68-year-old Las Vegas resident David Chou, a U.S. citizen from Taiwan, was motivated by anger over political tensions between China and Taiwan.

A shooting at a church in Orange County, which left one person dead and another five injured, was a "politically-motivated hate incident," authorities announced Monday.

There was a minute of silence Saturday to honor Dr. John Cheng, who was killed in the attack.

Five others were shot before parishioners stopped the gunman, and hogtied him with extension cords until police arrived.

"The shock that you experienced last Sunday should not have happened," said Rep. Young Kim. "There is no place in our community and in our society for any type of hate. We need to stand together."

"Without the actions of Dr. Cheng, it is no doubt that there would be numerous additional victims in this crime," officials said.

The victims range in age from 66 to 92, and they are expected to survive.

Chou has been charged with 10 counts, including murder, and faces the death penalty.

A Las Vegas man accused of killing a prominent doctor and injuring five others in a church shooting in Laguna Woods has been charged with 10 counts and could face the death penalty.