Homeowners in unincorporated Lake Elsinore on their own, on the hook for disaster cleanup 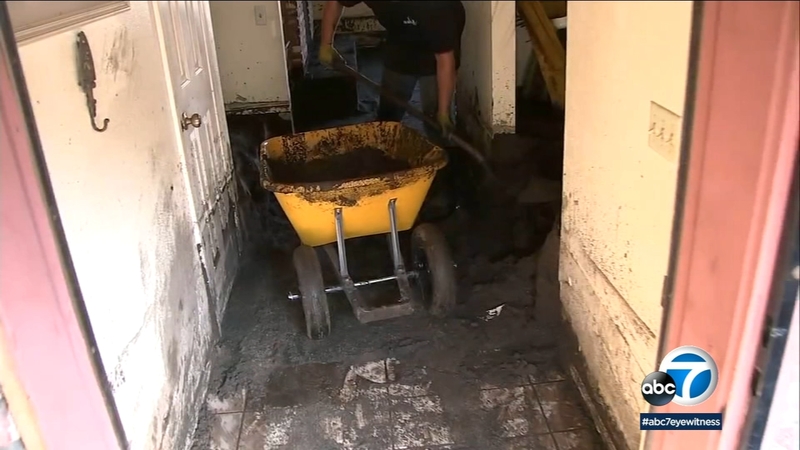 Lake Elsinore neighborhood on their own, on the hook for disaster cleanup

LAKE ELSINORE, Calif. (KABC) -- A week and a half after storms devastated the Robin Hood Estates community in Lake Elsinore residents are continuing to cleanup.

The unincorporated area of Riverside County was hard hit by floodwater and mud.

"First the fire and now this -it's pretty crazy," Andre Bonteer said.

Bonteer's rental home was hit by the mud that flowed from a creek that runs along the neighborhood. His drywall in his kitchen and dining room had to be removed after it was flooded with 3 inches of muddy water.

He and his neighbors have grown frustrated with the response to the cleanup and lack of any work to clear out the creek bed.

"We can't get a clear message on who is in charge. Is it the forestry service or is it Riverside County?" Bonteer said.

Bonteer pointed to the creek bed, which is full of mud and debris.

"They need to take a look at this creek bed and get it handled before the next one comes through cause all the culverts up the street where it came from are clogged and they need to be cleaned out," he said.

The problem is it's not Riverside County, the City of Lake Elsinore, or the U.S. Department of Forestry that's responsible for this pocket community - it's the residents who live there.

"The challenge in that particular neighborhood is they're all privately owned streets," said District 1 Supervisor Kevin Jeffries.

Jeffries and the Riverside County Office of Emergency Management said property owners are responsible for the cleanup of streets along with the creek bed and culverts that flow into it.

The county said any mud or debris dug out and put on the street will be picked up by the county as a courtesy.

"We were able to help as much as we could on private streets. My concern is the next potential round of storms and what the impact could be to those residents," Jeffries said.

Jeffries said even if the county could do more it's not likely to help. The community is considered extremely high risk due to the Holy Fire burn scar and the likelihood of a landslide during the next heavy rainstorm.

He said the county's Department of Transportation is looking at putting down K-rails in the neighborhood to help divert water and mud flow, but even K-rails have limits.

"A K-rail is good basically for your very low flow. If the flow increases and a lot of mud and rocks come in behind it, the K-rail then becomes a projectile itself," Jeffries said.

Bonteer has cleaned out a portion of the creek bed behind his home in the hopes any rainwater will flow away from his property. Even so, he said he's not planning to stick around during the next storm.