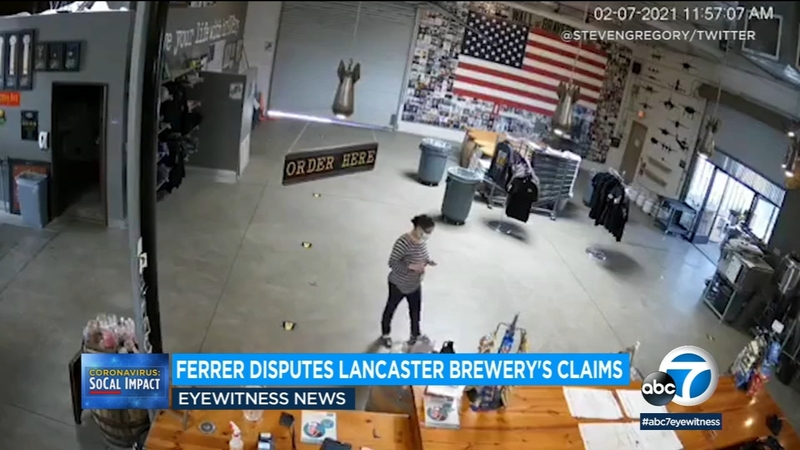 Brian Avery, the co-owner of Bravery Brewing Company, released video of a health inspector supposedly celebrating after he says she temporarily shut down the business.

But Ferrer says the inspector was shaking her hands dry after using hand sanitizer. She added the inspector never closed the business, and was trying to clear up some questions about paperwork.

Avery claims the health inspector walked in shortly after the brewery opened and interrupted a transaction with a customer, ordering the only employee there at the time to halt service and close down immediately.

RELATED: Lancaster brewery owner says health inspector cost him business even though they were within code
EMBED More News Videos

A Lancaster business owner says a Los Angeles County health inspector cost him precious customers on Super Bowl Sunday after they were briefly shut down, despite the fact that they were within code.

The health inspector allegedly shut down service because the brewery didn't have a food truck on site to serve meals, which is required under the current county health order if the business is doing on-site dining.

But since the brewery was only taking to-go orders that day, Avery said they didn't need a food truck.

The lone employee looped in Avery and they requested that the health inspector contact her supervisor, who later confirmed that they did not need a food truck present that day.

During the back and forth, they had to temporarily halt businesses and customers had to wait.
"Right now, for us, a good month is breaking even through all of this. So it might not seem like a lot for us to lose 20 to 40 minutes of sales, but every dollar counts right now for us," Avery said at the time.

After clearing up the initial issue, Avery says the health inspector then noticed that the public health notices posted inside the building were old and made the employee update them before they could resume service.

While the employee was in the back updating the notices, surveillance video captured the video of the health inspector, which did not sit well with Avery.