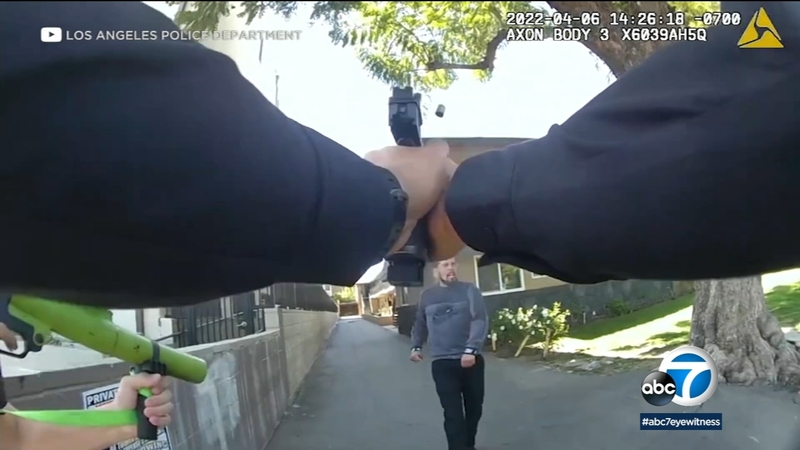 The incident happened on April 6 shortly before 3 p.m. in the 8700 block of Tobias Avenue. The incident ended in a deadly confrontation with Los Angeles police, and it was all captured on multiple LAPD bodycams.

The rampaging man, later identified as 33-year-old Jesus Alan Castellanos, was captured on multiple surveillance cameras at an apartment complex swinging a metal pipe, smashing window after window at a local apartment complex.

One woman made a frantic call for help to 911.

"There is a neighbor here...he's breaking my window...and telling me he's going to kil me if I call the police," the woman told the 911 dispatcher.

Police are investigating an officer-involved shooting in Panorama City that left a suspect dead Wednesday, according to investigators.

However, things continued to escalate, and when Castellanos suddenly charges at the officers, the body camera video clearly shows a knife in his hand.

Officers deployed their Tasers, but at least one officer opened fire with a gun. Castellanos quickly fell to the ground.

Officers approached and rendered aid to Castellanos. Responding paramedics rushed him to a local hospital, but he died from his injuries.

AIR7HD captured images of the investigation following the deadly police shooting. The video shows broken glass -- the result of so many windows smashed at that apartment complex during the rampage.

AIR7HD also captured the man's knife on the driveway. A 6-inch knife was recovered at the scene and booked for evidence, according to LAPD.

A use-of-force investigation is underway in this case. No officers or bystanders were injured during the incident.