LA sees 12% spike in homicides: 'Los Angeles is not alone in this trend,' Mayor Garcetti says 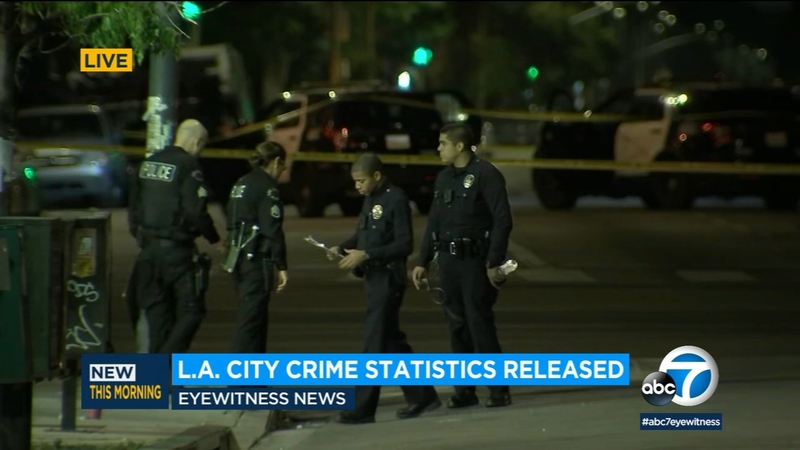 LOS ANGELES (CNS) -- Los Angeles saw spikes in select categories of crime in 2021, most notably a nearly 12% year-over-year climb in homicides, but the mayor and police chief said redeployments of officers and a focus on getting guns off the streets are preventing the numbers from soaring much higher.

Among the more notable statistics were the 11.8% increase in homicides, while violent crime increased 3.9% and property crimes rose by 4.2%. The number of people shot rose by 9%.

Mayor Eric Garcetti and LAPD Chief Michel Moore both acknowledged the increases, but the mayor noted that the pace of homicides was stemmed in the second half of the year.

"To put that in context, I remember the first half of this past year, when those numbers were well north of 25%,'' Garcetti said of the homicide rate.

The mayor also reminded people that L.A. is not the only city experiencing an increase in violent crime, which is happening in major cities across the U.S. amid the COVID-19 pandemic.

"Los Angeles is not alone in this trend. Now to put it in context again, the six most populous cities in America, besides New York, this is the safest city when it comes to homicides. In Chicago and Philadelphia and Houston and even in Phoenix, those numbers are higher,'' Garcetti said. He also added that the last 10 years have been "the safest decade on record in L.A.'s history,'' despite the recent uptick in crime.

Federal prosecutors have charged four people in connection with the robbery and killing of an off-duty Los Angeles police officer and allege the suspects are tied to a street gang, authorities said Thursday.

Garcetti said that over the past year, "8,650 illegal firearms were taken off our streets thanks to the men and women of this department and our partners in federal law enforcement.''

Moore said the creation of a violent crime task force put more officers on the streets and on foot patrols, interacting with residents and community groups.

"Our focus this year has been to shift our resources on this violent crime, particularly shooting violence and robberies, particularly robberies in the second half of the year, where we saw the increase in their representation in the number of robberies involving a firearm,'' Moore said.

The mayor also highlighted the work of his office's Gang Reduction and Youth Development (GRYD) program, which focuses on gang prevention and intervention.

He thanked the program's interventionists for "rushing to the fire fights, rushing to make the peace and rushing in there to intervene.''

The program's service area has increased by 50% since 2013, and in the last year, the program provided prevention services to 3,100 Angelenos and case management to 2,700 families who were "most at-risk of being victims or perpetrators of violence,'' the mayor said.

Garcetti also noted the city's pilot program to divert some suicide-related 9-1-1 calls to Didi Hirsch Mental Health Services. More than 1,400 calls were diverted to Didi Hirsch, saving more than 7,000 hours of LAPD patrol and "some tragedies that we'll never be able to quantify,'' Garcetti said. A similar pilot was also launched with the service provider Urban Alchemy to divert some nonviolent 9-1-1 calls related to homelessness.

Villanueva presented year-end statistics for 2021 but said it was too early to draw any conclusions about trends in the first 12 days of 2022.

"Because we're only two weeks into the first year, statistically it's going to be all over the map,'' the sheriff said.