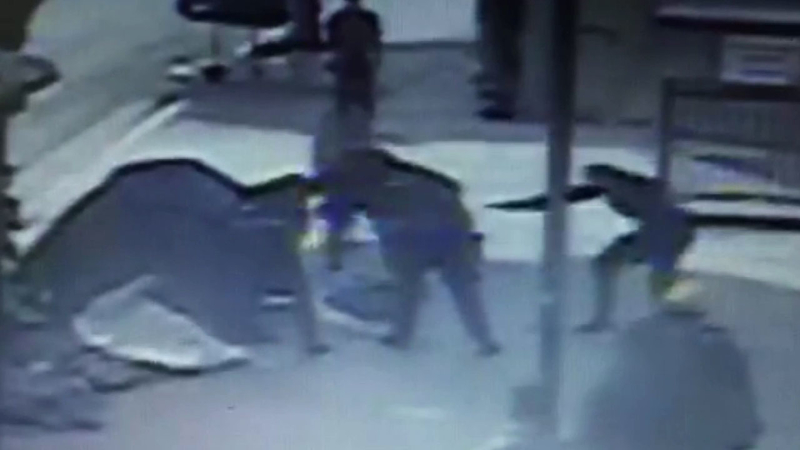 LOS ANGELES (KABC) -- A fatal police shooting during a scuffle on Skid Row in downtown Los Angeles Sunday is being brought into the national discussion over excessive force. This as Los Angeles police Chief Charlie Beck says the suspect reached for an officer's gun.

The incident, which was videotaped by Anthony Blackburn, has sparked a firestorm on social media. In the video, a rookie officer could be heard saying that the suspect had grabbed his gun, Beck said.

"You can hear the young officer who was primarily engaged in the confrontation saying that 'He has my gun. He has my gun,'" Beck said. "He says it several times, with conviction." 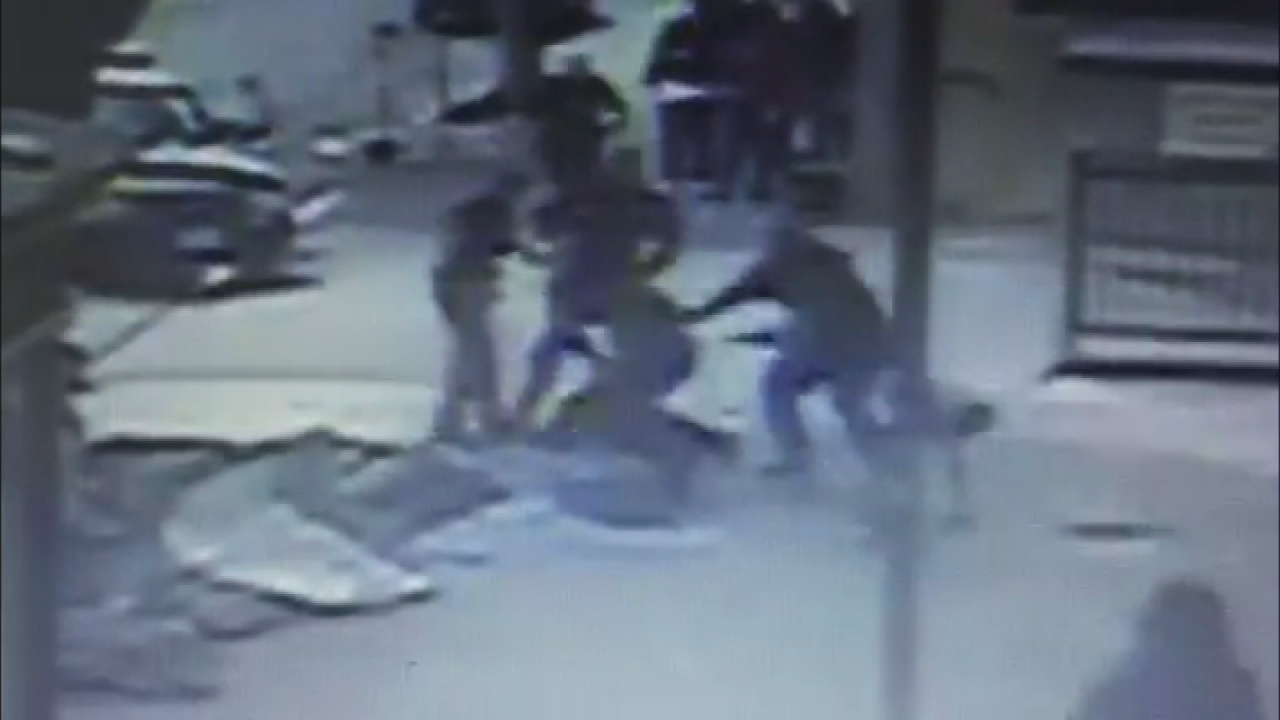 VIDEO: Surveillance footage shows moments before Skid Row shooting
VIDEO: A security camera at the Union Rescue Mission captured the events leading up to the fatal shooting of a homeless man by LAPD on Skid Row Sunday.

A second video shot from a security camera at the nearby Union Rescue Mission was also released Monday. The latest video was shot at a slightly greater distance and captured the events leading up to the shooting.

In the footage, the man is seen talking to officers. Suddenly, he dives into his tent. Officers are then seen trying to get him out of his tent with guns drawn. The suspect shortly comes out and is seen swinging at officers.

Local activists and people who live on Skid Row rallied near the 500 block of San Pedro Street where the homeless man was killed Sunday around noon. White roses were placed over a tent, blankets and clothing belonging to the suspect known as "Africa."

"What do we want? Justice! When do we want it? Now!" activists could be heard shouting.

"We've got to fix this," said William Smart Jr., president of the Southern Christian Leadership Conference. "This is too much."

While several people expressed outrage over the shooting, Beck says the officers appear to have acted appropriately. Beck told reporters Monday that the suspect "repeatedly refused to comply with officers' demands."

"Had the individual not grabbed the officers' pistols, certainly, we would not be having this discussion," Beck said.

The L.A. police chief showed photos of an officer's gun with alterations he said were consistent with a struggle over the weapon.

"This is indicative of a struggle over the weapon," says @LAPDChiefBeck regarding photo of officer's pistol #SkidRow pic.twitter.com/ZtIXmaQ2xd

"As you can see, the slide is partially engaged and a round has been partially ejected and fouled the firing chamber," Beck said. "This is indicative of a struggle over the weapon. As you can also see, the magazine is dislodged from its resting place. This is also indicative of force used on the weapon. There's also a screen grab from a privately taken video. If you examine that, it appears that the suspect's hand is reaching for the officer's waistband in the area where his pistol would be located."

He added that officers first used a stun gun against the man, and then shot him when he continued to resist, after responding to a robbery call. Beck says the preliminary investigation shows that the suspect was shot only after he reached for an officer's gun.

"While on the ground and struggling with the officers, the man forcibly grabbed one of the officers' holster pistols, resulting in an officer-involved shooting," Beck said.

The three officers, one of whom is a sergeant, involved in the shooting were not identified, but Beck said two were treated for injuries at a hospital and released, and one is now using crutches.

L.A. Mayor Eric Garcetti says the fact that two of the responding officers were wearing body cameras will help in the investigation, but that a "thorough investigation" is needed.

"We owe this city a thorough investigation into what happened," @ericgarcetti on fatal #SkidRow shooting by #LAPD. pic.twitter.com/T0qYiqfdxs

"The murkiness that we had in the past should be cleared up by body cameras more often than not, but nobody should depend on cameras by themselves," Garcetti said.

Witnesses to Sunday's shooting say "Africa" was mentally ill and had been living on the streets for several months. They say he simply needed help.

"They hassle all of these people every day, every day," an unidentified man shouted during the rally.

At least two of the officers had been through the most extensive mental illness training offered by the department and had experience working on Skid Row, where an estimated 1,700 homeless people live.

"They were trained to work with homeless," said Police Commission President Steve Soboroff. "It wasn't a SWAT team looking for problems."

On Skid Row, many residents believe that officers overreacted.

"That was [a] brutal, inexcusable, act of violence by the police department," said Lee Hunt, a resident of Skid Row.

Others who offer mental health services to those living on the streets sympathize with officers.

"It's just difficult. It's a difficult area. It's very difficult to be here, work here," said Fernando Medina, who works on Skid Row.

The Youth Justice Coalition plans to hold a rally Tuesday near San Pedro and 6th streets at 7 a.m.

The Downtown Clergy Council has scheduled a prayer vigil for "Africa" Wednesday at 5 p.m. at the Central City Community Church, located at 419 East 6th Street.

"This will be a time to mourn and pray for 'Africa', his family, officers involved in the shooting, and the community," said president Kevin Haah.

Minnie Hedley, the president of the Los Angeles NAACP branch, says she is "deeply disappointed" with the department's actions.

"These homicides committed by police officers in the Los Angeles area seem to have become a weekly occurrence. We remain horrified by the continued use of excessive force we have witnessed at the hands of local police. The Los Angeles Branch NAACP calls on LAPD Chief Beck to institute further training and stiffer penalties for those officers who use excessive force," Hedley said in a statement.

"The shocking shooting demands a transparent, impartial, and speedy independent probe to determine if there was wrongdoing by the officers," Hutchinson said.

Soboroff said the independent inspector general and the district attorney have begun investigating. The investigation may take up to five months, a LAPD source familiar with the incident told ABC News. Anyone who may have witnessed the incident was urged to contact LAPD.