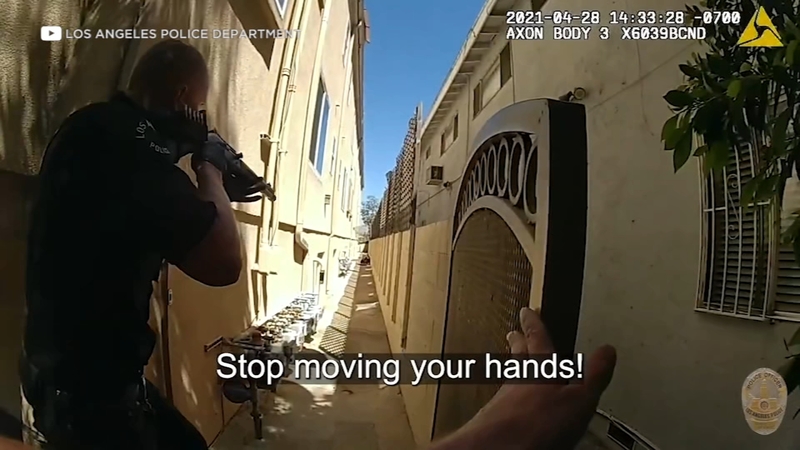 VAN NUYS, LOS ANGELES (KABC) -- Warning: The footage in the above media player is graphic. Viewer discretion is advised.

Authorities released a frantic 911 call and new body camera video Saturday of the aftermath of a gun battle between an off-duty Los Angeles police officer and an armed suspect in Van Nuys in April.

The incident occurred around 2:30 p.m. on April 28 in the 5200 block of Vesper Avenue, where Los Angeles police officers responded to a call of shots fired.

The video includes audio of a 911 call from a woman who was trying to help the wounded officer following the shooting.

Footage shows officers discovering the suspect -- later identified as 24-year-old Christopher Carmarena-Quintanilla -- suffering from gunshot wounds in a breezeway on the side of the apartment.

An off-duty Los Angeles police officer was shot Wednesday afternoon in Sherman Oaks, and a suspect is in custody, authorities said.

LAPD Chief Michel Moore said at the time of the incident that the gun battle happened when the off-duty officer left his apartment and went to a parking garage of the complex. The officer saw the suspect had broken into his vehicle and was wearing the officer's bulletproof vest and had stolen the officer's gun from his duty bag, which was stowed in the car, Moore said.

The officer -- later identified as Mike Beyda, who was armed with a backup handgun -- confronted the man about the break-in.

An altercation ensued, leading to the shootout, Moore said.
The man fired at the officer, and the officer returned fire, Moore said. The gun battle led to the breezeway, where the man was shot in an arm and shoulder and fell to the ground.

The officer retrieved the gun from the man and returned to his vehicle. He placed the weapons near his vehicle and collapsed with two gunshot wounds in his chest and one in his thigh, which he sustained during the shootout.

Beyda and Carmarena-Quintanilla were taken local hospitals where they both received treatment for their injuries.