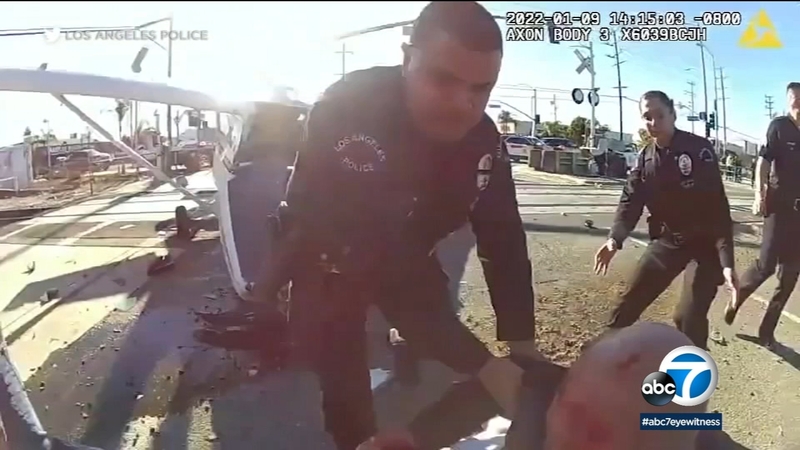 VAN NUYS, LOS ANGELES (KABC) -- The man who survived after his plane crash-landed onto railroad tracks in Pacoima earlier this year, had an emotional reunion over the weekend with the quick-acting police officers that saved his life.

Police body cameras show the moments when officers pulled pilot Mark Jenkins out of his downed plane right before it was hit by a Metrolink train, saving his life back in January 2022.

On Saturday, four Los Angeles Police Department officers from the Foothill Division were honored for that life-saving rescue. Jenkins shared his appreciation for the officers who saved him.

"I told them I loved them and thank you for saving my life, and a bunch of great, crazy guys," Jenkins said. "They did their duty and I thank them for that very much."

An appreciation event was held at the Condor Squadron. The officers also got to fly with the Squadron.

The officers reflected back to those moments in January when they jumped into action.

"Just thinking back on that moment just hearing the train and feeling the vibrations through the floor, and just hearing crumpling metal, and I was just like 'wow, that was close, that was really close'" said LAPD officer Christopher Aboyte.

"Being in the moment, it was just, we needed to take action," added LAPD officer Joseph Cavestany. "It was just kind of second nature."

Jenkins' plane had engine failure and crashed onto Metrolink tracks near Whiteman Airport in Pacoima, less than a mile from the LAPD Foothill Division office.

"The timing I think was just impeccable. And, you know, they say everything happens for a reason. You know, I was down in that area, I don't patrol nearby there that day, but I had some other business that put me there, and I think, just God was on everyone's side that day," said LAPD officer Robert Sherock. "I'm just glad everything worked out.

Jenkins says he doesn't remember much about the plane crash but he does remember when his engine failed he had one goal in mind.

"I had seconds to make a decision on what to do," Jenkins said. "I had always known that if I had an engine failure and I wasn't any higher than the tower, I knew that I had to take evasive action and land somewhere that didn't kill people. My goal was to land where I didn't kill anybody. I take that risk, they don't. And I didn't have anybody in my way except for the railroad track."

The officers' quick action saved Jenkins. The group was thankful to get together.

"God put us in the place to be at the right time, and we were able to do our job," said LAPD officer Damien Castro. "And fortunately everyone made it out OK, so, just doing our job."

Following that plane crash, Congressman Tony Cárdenas tweeted that he was calling on the FAA and the NTSB to create a report examining the safety concerns of Whiteman Airport.