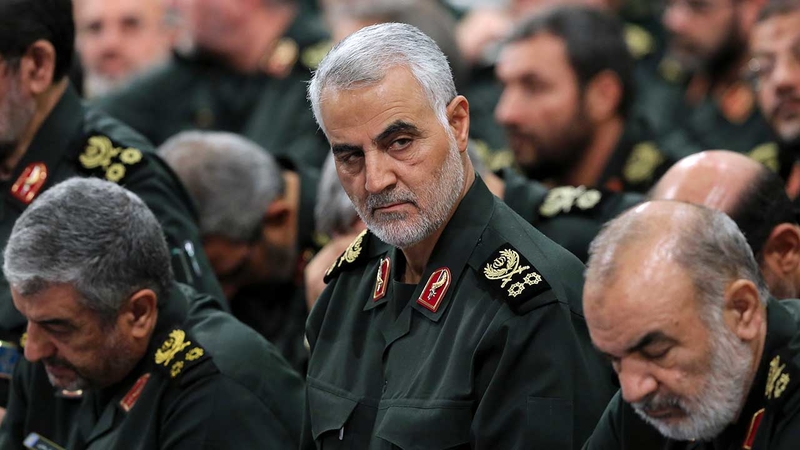 LOS ANGELES (KABC) -- The LAPD is on alert and "monitoring the events developing in Iran" in the wake of the U.S. airstrike in Iraq that killed a top Iranian general who had been the architect of its interventions across the Middle East.

Iran vowed "harsh retaliation" for the death of Gen. Qassem Soleimani, the head of Iran's elite Quds Force, which marked a major escalation in the standoff between Washington and Iran, one that has careened from one crisis to another since President Donald Trump withdrew from the 2015 nuclear deal and imposed crippling sanctions.

"While there is no credible threat to Los Angeles, the LAPD is monitoring the events developing in Iran," the LAPD tweeted Thursday evening. "We will continue to communicate with state, local, federal and international law enforcement partners regarding any significant intel that may develop."

Similar steps were being taken at potential targets around the country, including in New York City.

Oil prices are surging in the wake of the U.S. airstrike that killed Iran's top general Qasem Soleimani. Experts weigh in on how this may hit your pocketbook.

"Have spoken with Commissioner Shea + Dep Commissioner Miller about immediate steps NYPD will take to protect key NYC locations from any attempt by Iran or its terrorist allies to retaliate against America," New York City Mayor Bill de Blasio said on Twitter. "We will have to be vigilant against this threat for a long time to come."

This Department is committed to ensuring the safety of our vibrant and diverse community, and we ask every Angeleno to say something if you see something.

The Secure Community Network, the nation's top organization dedicated to protecting synagogues and Jewish institutions around the country, has issued a notice to security professionals, synagogue leaders and law enforcement about the killing of Qassem Soleimani, urging them to be vigilant and report suspicious activity.

"The potential for threats to the Jewish communities outside of Israel cannot be disregarded," the notice issued Thursday night says. "Hezbollah and Iran have in the past responded to attacks via overseas terrorism, such as the 1994 suicide truck bombing of the AMIA Jewish community center in Buenos Aires, Argentina, and the 1992 attack at the Israeli Embassy in Buenos Aires."

The warning also notes that Soleimani's killing "comes after more than a year of escalating tensions between Iran and the United States."
EMBED More News Videos

Synagogue leaders are being urged to tighten security, to be vigilant, and report any suspicious activity in the wake of the U.S. airstrike in Iraq.

The United States urged American citizens to leave Iraq "immediately" following the Friday airstrike at Baghdad's international airport that killed Soleimani and nine others, Iran's state TV reported Friday. The State Department said the embassy in Baghdad, which was attacked by Iran-backed militiamen and their supporters earlier this week, is closed and all consular services have been suspended.
Around 5,200 American troops are based in Iraq, where they mainly train Iraqi forces and help to combat Islamic State militants.

Iran's Supreme Leader Ayatollah Ali Khamenei warned that "harsh retaliation is waiting" for the U.S. after the airstrike, calling Soleimani the "international face of resistance." Khamenei declared three days of public mourning and appointed Maj. Gen. Esmail Ghaani, Soleimani's deputy, to replace him as head of the Quds Force, .

Thousands of worshippers in the Iranian capital Tehran took to streets after Friday Muslim prayers to condemn the killing, chanting "Death to deceitful America."

The targeted strike, and any retaliation by Iran, could ignite a conflict that engulfs the whole region, endangering U.S. troops in Iraq, Syria and beyond. Over the last two decades, Soleimani had assembled a network of heavily armed allies stretching all the way to southern Lebanon, on Israel's doorstep.

However, the attack may act as a deterrent for Iran and its allies to delay or restrain any potential response.