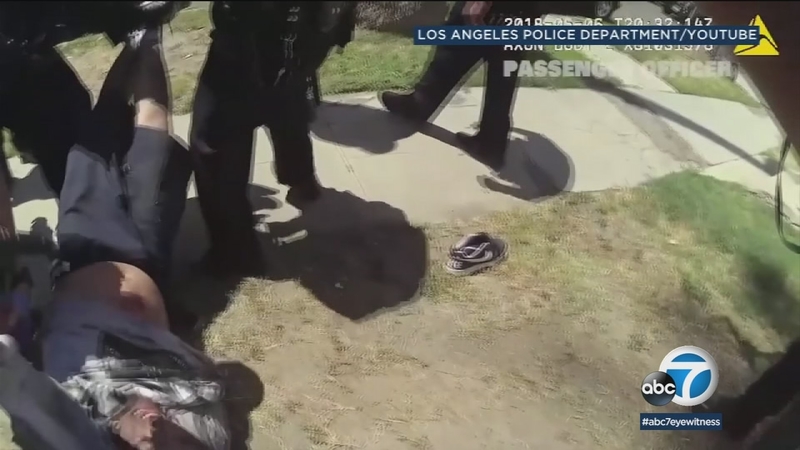 LOS ANGELES (KABC) -- The Los Angeles Police Department has for the first time publicly provided body camera video under a new policy requiring the release of footage within 45 days of critical incidents.

The video portrays a May 6 incident in which officers used less-than-lethal force - bean bag rounds and Tasers - to subdue a suspect in South Los Angeles.

That suspect, 24-year-old Jose Chavez, died in police custody. His family is suing, claiming officers used excessive force to arrest their loved one.

In the 911 call police say they saw Chavez with a brick in his hand. They say he failed to obey their commands and appeared to be under the influence of some kind of narcotics.

They say he refused to obey their commands and at some point picks up a blunt object. They use less than lethal force moving in struggling to arrest him.

"Telling the complete story is very important and 10 seconds of cellphone video showing the time of takedown and ignoring the rest of it where the officers are trying every verbal trick they know to get him to comply - I think it doesn't tell the whole story," Beck said.

The coroner's office has yet to determine an exact cause of death and is awaiting the completion of a toxicology report.

Beck says the new policy to release police body cam video has been in the works since the beginning the year.

"We are going to release more and more information regarding the use of deadly force and in-custody deaths within the Los Angeles Police Department."

The videos, he said, will be released after review by the department and the police commission and within 45 days of the incident.

"I caution the public what you will see from these presentations is policing at its rawest. You will see things that you have not seen before and unfortunately things that I think nobody should have to see."
Report a correction or typo
Related topics:
los angeleslos angeles countylapduse of forcebody cameras
Copyright © 2021 KABC-TV. All Rights Reserved.
TOP STORIES
How do new CDC guidelines affect SoCal?
COVID hospitalizations in LA County hit highest level since mid-March
CDC reverses course on indoor masks in some parts of US
1 killed, 1 wounded in shooting at Corona movie theater
Ed Buck found guilty in West Hollywood meth overdose case
Walmart will cover 100% of college tuition for its workers
CSU to require all students, staff to get COVID-19 vaccine
Show More
Arrest made in fatal shooting of Rite Aid clerk in Eagle Rock
Tenants of Caltrans-owned homes in El Sereno upset with SB51
OC congresswoman introduces Kobe Bryant Day resolution
Bay Area teen attacked by crocodile while vacationing in Mexico
Video: Dog thrown from truck in West Hills crash
More TOP STORIES News