The Los Angeles Police Department has released body camera video of a confrontation in Boyle Heights in which an officer repeatedly punched a trespassing suspect.
KABC
By ABC7.com staff 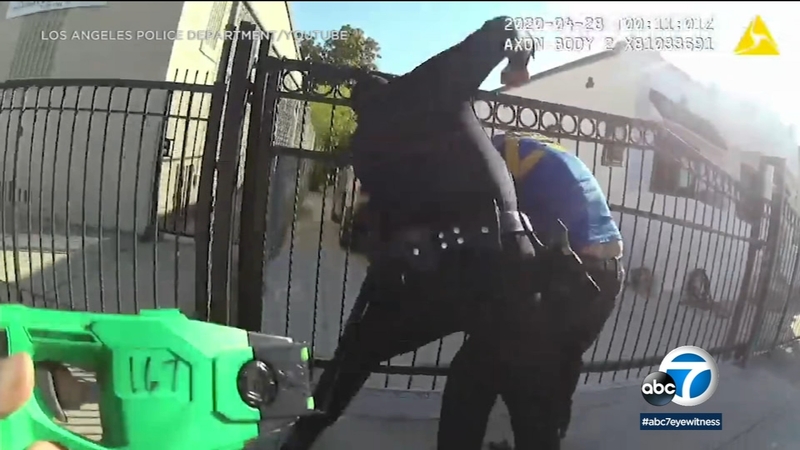 BOYLE HEIGHTS, LOS ANGELES (KABC) -- The Los Angeles Police Department has released body camera video of a confrontation in Boyle Heights in which an officer repeatedly punched a trespassing suspect.

The video shows the officer punching the suspect more than a dozen times as the man covers his head and does not appear to be resisting. The officer is later heard in the video giving an explanation for his actions, saying the suspect grabbed his hand, injuring his finger.

LAPD Chief Michel Moore called the video "disturbing" and said the department is cooperating with the District Attorney's office on a use-of-force investigation and "any potential criminal charges."

After cellphone video was released on social media last week, the incident has generated some criticism in the community. A protest was held last week in front of the LAPD Hollenbeck station and another is scheduled for this Friday.

The earlier video showed two officers talking to a man described as a trespassing suspect. The man has his hands behind his back and did not appear to be resisting although he was exchanging words with one officer, who then is seen in the video punching him more than a dozen times.

Disturbing cellphone video shows an LAPD officer repeatedly punching a man suspected of trespassing in East Los Angeles who had his hands behind his back and did not appear to be resisting.

The new LAPD bodycam video, from both the officer and his partner, provides an expanded look at what led to the incident, as well as audio of the exchange between the officer and the suspect.

Police were called to a Boyle Heights neighborhood on April 27 to ask a trespassing suspect to leave private property. In the video, the officers confront the man and he leaves the vacant lot, walking his bicycle.

After he walks down the block, he stops on the sidewalk and the officers tell him to keep moving. He tells them he lives in the neighborhood.

The officers then confront him again. They exchange words and the suspect can be heard repeatedly cursing at the officer, but it doesn't appear he is physically resisting.

"Ain't nobody fighting, the suspect replies."

Something possibly happens out of view of the partner's body camera and the officer is then seen repeatedly punching the man, who stands there trying to cover his head. His partner calls for backup.

Later in the video after backup arrives, the officer is heard telling the suspect "you (expletive) grabbed my hand (expletive). That's why I hit you."

The suspect denies grabbing him and the officer continues to insist he grabbed him, showing him an injured finger.

The suspect was later released from custody.

A community member provided cellphone footage to a police supervisor at the scene. After reviewing the cellphone video and the officer's body camera footage, the supervisor notified his commanding officer and Internal Affairs was brought in to investigate.

The officer has been placed on home duty pending the investigation.

In the video released by LAPD, Chief Michel Moore said the incident is being investigated and the department is cooperating with the District Attorney's Office on "any potential criminal charges that may be associated with the use of force."

"Public trust is paramount in our ability to protect and serve Los Angeles," Moore said. "I know these disturbing images and actions may test that trust."

Moore said he will make his judgment about whether to take any disciplinary action after the investigation determines whether the officer acted consistent with the department's policies on use of force and dealing with the public.

The entire video released by the LAPD, including comments by Chief Moore, can be seen here on YouTube.
Warning: contains strong language.