The footage appears to show the officer punching the man more than a dozen times, prompting an LAPD internal affairs investigation.
KABC
By ABC7.com staff 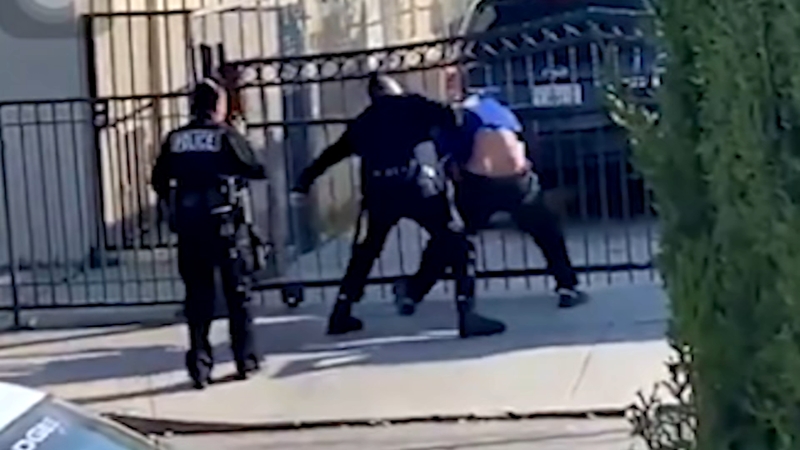 LOS ANGELES (KABC) -- Disturbing cellphone video shows an LAPD officer repeatedly punching a man suspected of trespassing in Boyle Heights who had his hands behind his back and did not appear to be resisting.

The Los Angeles Police Department says it is aware of the video and Internal Affairs is investigating the incident, which happened April 27 in front of a church in the Boyle Heights area.

In the video, two officers are confronting a man at a fence in front of the church property and a residential building. The suspect complies with orders to turn around and place his hands behind his back. He does appear to be exchanging words with the officer.

At one point the officer, standing behind the suspect, suddenly begins punching him repeatedly in the head and body. The suspect does not appear to be fighting back but is ducking and trying to shield himself and step away. The male officer's female partner is standing by watching the incident and at one point appears to radio for assistance.

An off-duty Los Angeles Police Department officer was arrested for allegedly shooting another officer while on a camping trip in Apple Valley.

The officer appears to punch the man more than a dozen times.

After more officers arrive on scene, a woman standing at the nearby residential building is heard trying to defend the suspect. The officer involved in the incident can be heard yelling at her to get inside and saying the suspect attacked him.

LAPD released a press release on the incident. The department says it started as a trespassing call in the 2400 block of Houston Street.

"At that location the two officers made contact with a male trespass suspect and directed him to leave the private property," the police statement said.

"During the course of the investigation a physical altercation occurred between the suspect and one of the officers, resulting in the officer receiving minor injuries to his hand. The suspect had abrasions to his head and face but refused medical attention."

Police say a community member provided cellphone footage to a police supervisor at the scene. It was not immediately clear if that was the same footage made public on social media this week.

After reviewing the cellphone video and the officer's body camera, the supervisor notified his commanding officer and Internal Affairs was brought in to investigate.