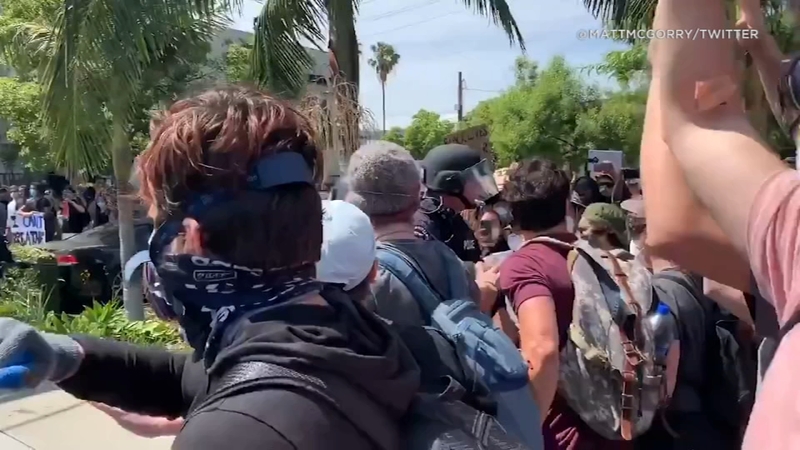 LOS ANGELES (KABC) -- Disturbing videos appear to show Los Angeles Police Department officers striking protesters with batons in the Fairfax district during what had seemed to be a peaceful demonstration.

Several people recorded footage of the Saturday afternoon incident, including Matt McGorry, an actor on the ABC television series "How to Get Away With Murder."

"More police brutality from the @BLMLA @WeBldPwr protest yesterday where cops starting swinging batons and shooting projectiles at people simply standing there with there hands up," McGorry said on Twitter, referring to the organizations Black Lives Matter Los Angeles and BLD PWR.

The officers, wearing riot gear, are seen approaching the crowd of protesters when an inaudible exchange occurs. At least two officers then begin swinging their batons, striking multiple unarmed demonstrators.

Whether anyone was seriously injured or arrested was unclear.

Asked to comment on the matter, the LAPD issued a statement to ABC7 that did not refer to any specific confrontation.

"We have also experienced vehicle and structure fires with widespread looting and destruction while trying to facilitate the first amendment rights of those peacefully demonstrating.

"Any person who believes they were wrongfully accused of a crime, unjustly injured, or experienced misconduct on the part of an officer can make a complaint with a Department supervisor or by calling the Professional Standards Bureau Complaint toll-free (800) 339-6868.

"Individuals can also make a complaint through the Office of the Inspector General at (213) 893-6400 Or oigcompl@lapd.online if email is preferred."