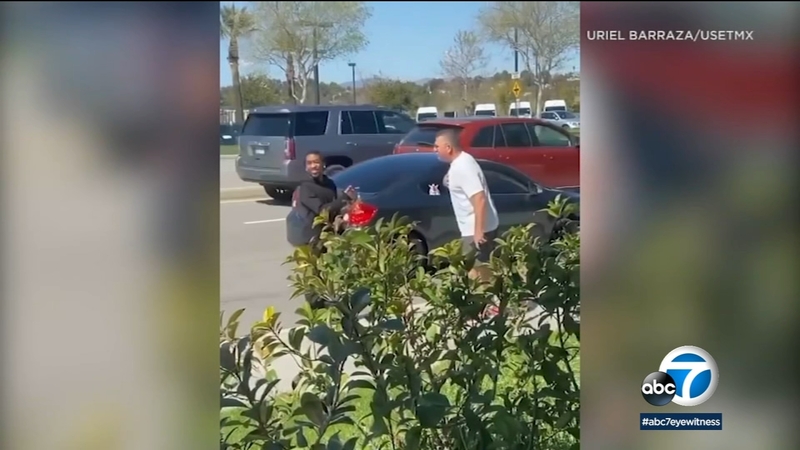 LOS ANGELES (KABC) -- After recording a now-viral video that shows a retired Los Angeles Police Department detective hurling racial slurs at a Black man after a minor traffic collision, a witness described his reaction to the disturbing incident in an interview with ABC7.

The witness, Uriel Barraza, began recording the heated exchange on his cellphone after he saw the two men almost came to blows.

"So, I started recording after that and that's when I got him saying that racist thing, him in a cage," Barraza told ABC7. "And I was all, 'That isn't right.'"

Barraza said both men used the n-word, but it was the former detective who took the verbal altercation to the next level.

The LAPD later confirmed that the person in the video is a former detective, assigned to the agency's Operations-Central Bureau Homicide division, who retired in May of last year.

That news came as a shock to Barraza.

"Someone who was taking care of us out in public is one of them, like being a racist towards people with skin color," Barraza said. "It's shocking."

The incident has prompted the Los Angeles County district attorney's office to announce it would review 370 cases that the detective handled while he was on the force.

"Under the law we are required -- once we become aware of someone having racist tendencies -- we have to notify the defense lawyers in all the cases that this individual may have been a witness or participated in the investigation," District Attorney George Gascón said.

The LAPD has launched its own internal investigation.

LAPD Chief Michael Moore called the comments made on the video wrong and corrosive to the Police Department.

"When we see something like this that undermines the public's confidence about ...respect for people," Moore said.