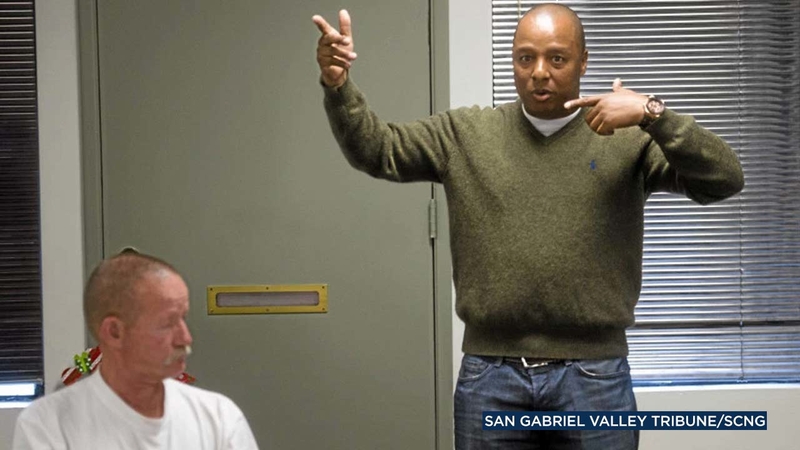 LOS ANGELES (KABC) -- A Los Angeles County sheriff's deputy has been arrested for allegedly agreeing to provide security during the delivery of narcotics from the Southland to Vegas in exchange for money.

Deputy Kenneth Collins was arrested by FBI agents Tuesday morning along with three other men.

The arrest took place in Pasadena, where Collins and the three others were allegedly getting ready to provide "security" for the transport 45 pounds of cocaine, more than 13 pounds of methamphetamine and cash to Las Vegas, according to a press release from the U.S. Department of Justice.

Authorities said the three thought they were going to do the job in exchange for $250,000. This fee was negotiated during an undercover FBI investigation, in which Collins allegedly said he and his team would take calculated steps to prevent legitimate law enforcement from intercepting the drugs

An affidavit outlines an earlier scheme in November, in which Collins agreed to accept $25,000 in payment for providing security during the transport of what they thought were 6 kilograms of methamphetamine, as well as marijuana and counterfeit cigarettes in another trip to Las Vegas from the Los Angeles area, the Justice Department press release stated.

The transport went smoothly, and that's when Collins wanted responsibility for a larger shipment. So, on Jan. 5, the undercover agent and Collins agreed on the Pasadena transport.

Collins, David Easter, 51, of the Hyde Park and Grant Valencia, 34, of Pomona, were charged in a federal criminal complaint filed last week.

In justifying the high fees for his services, Collins allegedly told an undercover FBI agent "we're cops" and "all of our transports make it through."

The fourth man, Maurice Desi Font, 56, of South Los Angeles, is expected to be charged by federal prosecutors in a second criminal complaint on Tuesday.

"Deputy Collins sold his badge to assist an individual he thought was a drug trafficker," said United States Attorney Nicola T. Hanna. "The deputy allegedly used his status as a law enforcement officer as a guarantee when he promised safe travels for large quantities of illegal narcotics. This case is part of our long-standing and ongoing commitment to root out corruption, particularly when it involves sworn law enforcement officers."

Los Angeles County Sheriff Jim McDonnell said the news of the deputy's arrest was "tragic" for law enforcement and the communities served by deputies.

"I guess if you look at it from a system standpoint, the system worked. We found out about criminal misconduct, caused an investigation to be done, worked with our federal partners and then ended up with what we saw today with an indictment," McDonnell said.

According to the affidavit, the FBI had been investigating Collins in relation to a scheme to accept cash payments for providing security for illegal marijuana grow facilities, as well as assisting in the distribution of controlled substances.

An undercover FBI agent, who was posing as a family member of a wealthy investor looking to finance an illegal marijuana grow house, first met with Collins in August 2017, authorities said.

Collins offered to provide security for an illegal marijuana grow house and claimed to have three "teams" that already provided security for drug operations across San Bernardino and Los Angeles counties.

During one of the meetings with the undercover FBI agent, Collins displayed his sheriff's department badge and lifted his shirt to reveal a firearm hidden in his waistband, which investigators believed was to emphasize that he was a law enforcement officer and his services, therefore, were more valuable to a drug organization.

Over the course of several meetings, Collins also offered to "fix problems" for the undercover agent, including by physically assaulting people, in exchange for cash, authorities said.

The affidavit stated that Collins claimed to have a "team" comprised of "cops" who "travel...with guns." He described how he and two others recently "handled" a situation for a "client" in Boston by setting a luxury truck on fire.

During a meeting in September, the undercover agent told Collins that he was having an "issue" with a person in Northern California. In exchange for $2,000, Collins performed and delivered a "work-up" on that person, which included obtaining that person's home address and driver's license number, according to the affidavit.

When Collins delivered the "work-up" in early October, the deputy allegedly said that he could provide additional services in relation to that individual: "We can definitely, you know, kind of impact him a little bit," the affidavit stated.

All four men, who are charged with conspiracy to distribute controlled substances, were expected to make their first court appearances Tuesday afternoon in United States District Court in downtown Los Angeles.

If convicted of the drug trafficking conspiracy alleged in the criminal complaints, each defendant would face a sentence of up to life in prison.

Whenever a peace officer is accused of wrongdoing or even charged in a criminal case, the matter should be taken seriously. Accountability is a vital element of law enforcement and deputy sheriffs should be held to account for their actions. It is important to remind ourselves and the public that everyone - including deputy sheriffs are presumed innocent until proven guilty.

While we do not know all the facts, the arrest of a deputy is always shocking and very disappointing. We expect law enforcement officers to hold themselves to the highest moral standards in their professional and personal lives, making the news doubly upsetting. On one level, it's always sad when there's an allegation that a deputy has tarnished the star or crossed the line. On another level, there should be a comfort knowing that the men and women in LA County Sheriff's Department are not willing to sanction or tolerate any inappropriate conduct. As outraged as the public may be over these accusations, I guarantee you the men and women of the Sheriff's Department are twice as upset.