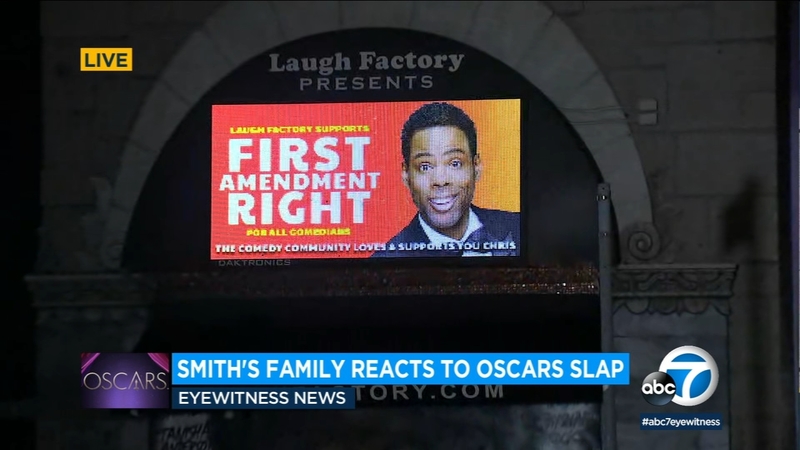 HOLLYWOOD, LOS ANGELES (KABC) -- Los Angeles' iconic Laugh Factory is showing support for comedian Chris Rock after he was slapped on stage by Will Smith at the 94th Academy Awards Sunday.

The sign outside the famous Hollywood comedy club reads: "Laugh Factory supports First Amendment Right for all comedians. The comedy community loves and supports you Chris."

READ MORE: Comedians react with horror at Will Smith's Oscars slap: 'Now we all have to worry'
EMBED More News Videos

In a bizarre moment at the Oscars, Will Smith slapped Chris Rock in the face after he directed a G.I. Jane joke at Smith's wife and actress Jada Pinkett Smith.

This comes as Will Smith's mother is opening up about watching her son win his first Academy Award and lose his cool in front of a global audience of millions.

"That's the first time I've ever seen him go off. First time in his lifetime," Carolyn Smith said.

Carolyn said she was surprised by his actions on Sunday and said she'd never seen him do that before.

Will Smith's sister wants people to understand how difficult it has been for Will to make it to this point in his career.

Will Smith's mother is sharing pride in her son's first Oscar as opinions continue to pour in over the actor's stage confrontation.

"People are like, 'oh I wish I was in such and such's shoes and those are my goals,' but you really don't know what it takes to get there," Ellen Smith said. "I've had conversations with him and it broke my heart listening to what he had to go through to get to where he is."

Will Smith did not immediately apologize to Rock during his emotional five-minute Oscar speech after receiving the Academy Award for Best Actor in a Leading Role. He was later criticized after videos circulated of him partying at a Vanity Fair party later that night.

Smith issued a formal apology to Rock on Instagram Monday, 24 hours after the event.

READ MORE: Will Smith apologizes to Chris Rock for slapping him at Oscars: 'I was out of line and I was wrong'
EMBED More News Videos

The best actor winner for "King Richard" apologized to Chris Rock in an Instagram post for slapping the comedian onstage at the 2022 Oscars.

"Violence in all of its forms is poisonous and destructive," Smith said. "My behavior at last night's Academy Award was unacceptable and inexcusable. Jokes at my expense are part of the job, but a joke about Jada's medical condition was too much for me to bear and I reacted emotionally.

"I would like to publicly apologize to you, Chris. I was out of line and I was wrong. I am embarrassed and my actions we not indicative of the man I want to be. There is no place for violence in a world of love and kindness."

READ MORE: What is alopecia? Some of those living with the disease speak out after Will Smith's Oscar slap
EMBED More News Videos

Some of those suffering from the autoimmune disease alopecia speak out after Will Smith slaps Chris Rock at the Oscars, following a joke by the comedian about Jada Pinkett Smith's hair style.

Chris Rock has yet to issue a formal statement regarding the incident but has chosen to not press charges against Smith for the public slap on Sunday.