LAUSD superintendent on COVID: L.A. is example of government dysfunction 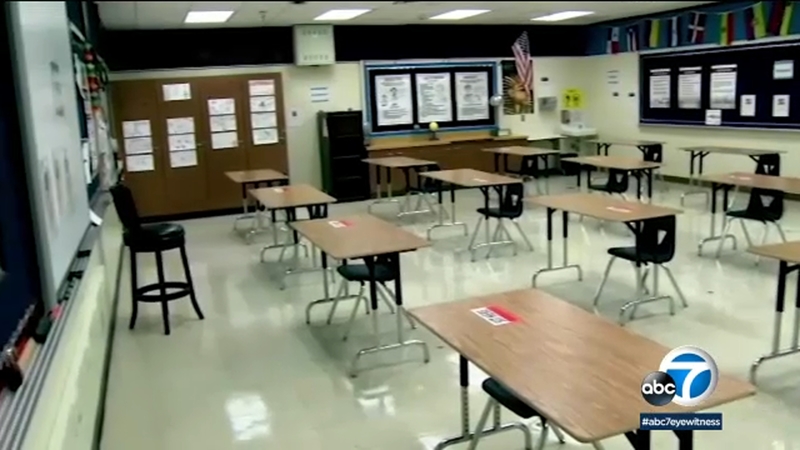 Beutner on COVID: L.A. is example of government dysfunction

LOS ANGELES (KABC) -- Los Angeles City Councilmember Joe Buscaino doesn't understand why Los Angeles Unified School District hasn't opened for in-person learning at 25% capacity. He's introducing a motion to instruct the city attorney to look at what legal measures can be taken to get kids back in classrooms.

"Politics should not get in the way of educating our students, and apparently there's a lot of egos involved here. Adults in the room at a time where I have students up and down my district and throughout the city of Los Angeles who are struggling emotionally, depressed, stressed -- a lot of anxiety because they haven't been in a classroom," said Buscaino.

But LAUSD Superintendent Austin Beutner says Los Angeles is a national example of how government dysfunction has allowed the virus to rampage out of control.

Beutner stressed that city and county leaders have had their priorities wrong, opening card rooms and restaurants before schools.

In a statement, Beutner and members of the board of education said:

"If Mr. Buscaino had called any of us asking how the city of Los Angeles might help schools, we would have suggested they redouble their efforts to reduce the level of the virus and make sure teachers and all who work at schools get immediate access to vaccines."

"I think the superintendent is wrong. The facts and the law are on our side. If you can pay for it, then you can send your kids to school. Meanwhile, here in Los Angeles, particularly in the impacted poorer communities and neighborhoods, our students are suffering," said Buscaino.

The Southern California chapter of the American Academy of Pediatrics, the CDC, and Gov. Gavin Newsom all agree it's safe to open schools immediately without vaccinating teachers.

But UTLA says leaders are ignoring the science to score political points.

"When Governor Gavin Newsom says schools are safe to reopen without vaccines, he should also tell us what he believes a safe number of deaths associated with that would be," said Cecily Myart-Cruz, President of UTLA.

Although COVID-19 is improving in L.A. County, it's still in the purple tier. But LAUSD has the ability to apply for a waiver from the county to start in-person instruction, which is what Buscaino is pushing for.