The LAUSD Board of Education rejected a proposal that would have cut 90% of the school police budget by 2024.
KABC
By Marc Cota-Robles and Sid Garcia 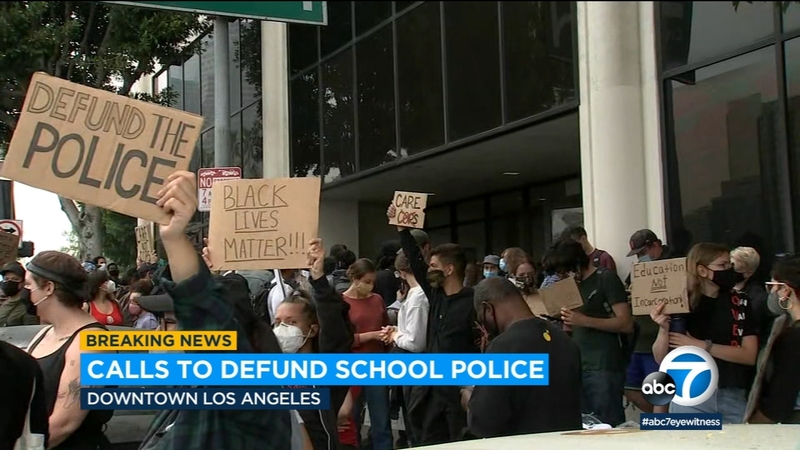 LOS ANGELES (KABC) -- The Los Angeles Unified School District Board of Education rejected a proposal Tuesday evening that would have cut 90% of the school police budget by 2024.

The proposal by board member Monica Garcia called for the School Police budget to be reduced by 50% in the 2021-22 fiscal year, then 75% the next year and 90% the following year, with funds redirected to the "highest need schools in support of African-American students."

The board weighed several proposals for rethinking safety on school campuses as activists, students and parents rallied outside district headquarters calling for defunding of the L.A. School Police Department.

The proposal by Garcia was one of three motions up for discussion Tuesday.

The other two proposals each call for a panel to study policing on campus.

The vote came at the end of a marathon board meeting that began at 9 a.m. with several hours of public testimony. The final board votes on a trio of resolutions addressing school policing weren't cast until 8:30 p.m. In the end, the board rejected all three of the resolutions, unable to reach consensus on any of them.

Only Garcia and board member Nick Melvoin supported Garcia's motion, which failed on a 2-4 vote, with board member Kelly Gonez abstaining.

More than 150 people signed up to address the board at its regular Tuesday meeting, which was held virtually to stay in compliance with coronavirus safety guidelines. Two hours into the meeting, comments were still being heard, with the majority of speakers asking for the elimination of school police.

During the meeting, Black Lives Matter-L.A. activists and supporters held a large demonstration outside to demand the board reallocate the funds to other student-serving initiatives.

Many of those rallying outside the district's offices and addressing the board called for increased mental health services, school nurses and other support for students rather than police. A few speakers argued there might be fewer crimes at schools if students' basic needs were being met.

"The message is that we're here to defund the police, invest in Black students' futures and basically take back what the district has stole from Black communities," Sikivu Hutchinson said. "We have African-American students that are 8% in the district and yet 25% of the students that are consistently criminalized, harassed, surveilled.

LAUSD police -- who are not part of the Los Angeles Police Department -- responded to more than 100,000 calls last year, including threats of mass shootings and bombs at schools, as well as robberies, sexual assaults, burglaries and other serious crimes, Beutner said.

While an overwhelming amount of people calling in to the meeting and demonstrating outside supported defunding the police, some had dissenting opinions.

Last week, protesters outside LAUSD headquarters blocked the street as they rallied for change. Some teachers told Eyewitness News that more resources like counselors, psychologists and educators are needed, not more cops.

A major push to "defund the police" is getting support from leaders of United Teachers Los Angeles.

Beutner reiterated Monday that the issue is complex and requires consideration by a designated task force that he has appointed to report back to the board with its recommendations.

"Before one rushes to judgment on this issue, it is important to look carefully at the lived experience in schools in the communities we serve and remember school campuses must be safe for all members of the school community: students, staff and families,'' Beutner said. "Those looking for a simple answer will be disappointed because it doesn't exist.''

He reminded the public school police is not part of the LAPD or L.A. County Sheriff's Department.

"They're trained differently and their role is different," he said. "They've responded to over 100,00 calls last year, including threats of mass shootings and bombs in schools, and handled many robberies, sexual assaults, burglaries and other serious crimes."

Beutner has also said he would recommend the elimination of pepper spray and the use of carotid holds, or neck holds to control someone. He said choke holds have not occurred in recent memory, but considers the policy change to be symbolically important.