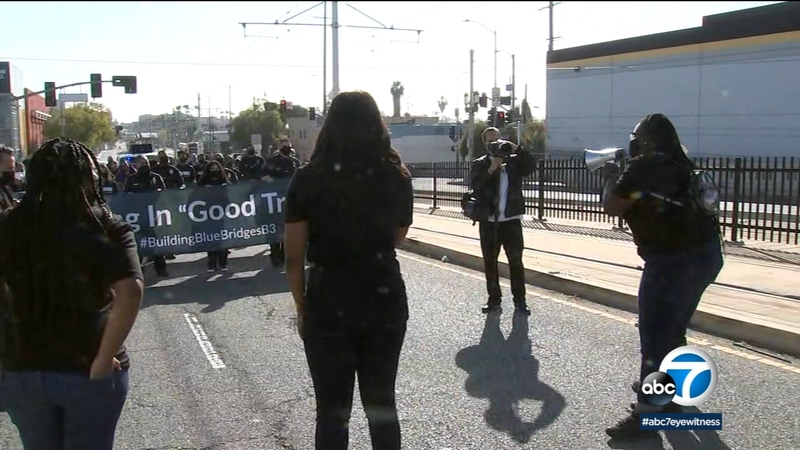 BOYLE HEIGHTS, LOS ANGELES (KABC) -- When students in Los Angeles county return to campus, school police officers will be gone and will instead be replaced by staff trained in de-escalation and conflict resolution.

On Saturday, LAPD officers joined students and members of the community for a symbolic march across the First Street Bridge in Boyle Heights. The group dubbed the joint march "Good Trouble," marking the arrest of the late Congressman John Lewis 61 years ago as he fought for civil rights.

"Good Trouble for us today is all about reimagining public safety at our schools, in our communities, and for a lot of young people who are going to be here today to be a part of the process," said Daphne Bradford, the founder of Building Blue Bridges.

That organization works to build relationships between law enforcement and the youth, like Princess Adkins, for positive change.

"Since my grandpa is a retired LAPD officer, I just want people to understand that not all cops are bad. There are good ones out there," said the Hamilton High School student.

"They did a survey after they made a decision to defund the L.A. school police, and in the survey, the parents and the kids didn't find a problem with the school police being on campus," Bradford said.

The mile-long march to the LAPD headquarters was only the first step. The group held a cultural sensitivity summit to address the consequences of defunding the police and what policies they'd like to see implemented within the department.

Following the summit, the group says they plan on taking some of the policies they came up with Saturday and present them to Mayor Eric Garcetti in the hopes of implementing them.