Lawrence Andrews was a running back on Apple Valley High's JV team, and according to his dad, he was a true standout on the field.
KABC
By Leticia Juarez 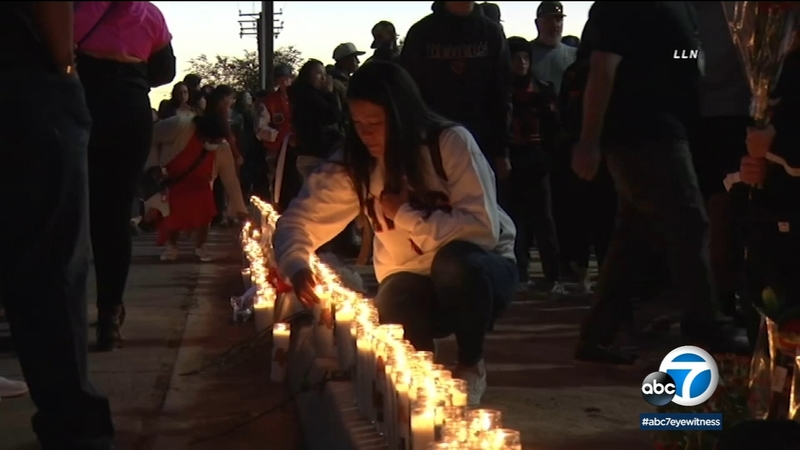 APPLE VALLEY, Calif. (KABC) -- A 14-year-old student athlete with a bright future was killed Tuesday night in a hit-and-run crash in Apple Valley, prompting a search for the suspect who fled the scene, authorities said.

The crash happened just after 8 p.m. on Ottawa Road, between Navajo and Manhasset roads, according to the San Bernardino County Sheriff's Department.

Witnesses say the teen, identified as Lawrence Andrews, was hit by a white or silver two-door coupe going over 60 mph near James Wood Park. They say he was there to help coach his younger brother's football team.

"The car was gone before my baby even landed from the air," said the boy's mother, Sarah Andrews. "Next thing, it was like the car sped up as it got closer, and I barely pulled my younger one out of the way, and I went back to reach for Lawrence, but he wasn't there. He was gone."

The boy was pronounced dead at the scene.

On Wednesday, heartbroken family and friends stopped by the crash site to honor the teen.

Lawrence was a running back on Apple Valley High School's junior varsity team, and according to his father, he was a true standout on the field.

"He was a very good football player," he said. "I saw him going somewhere, and it just hurts to see that he's not ever going to be here again."

The teen would've turned 15 at the end of the month, according to his family. The Apple Valley Football Booster Club even organized a candlelight vigil at the site of the crash Wednesday night.

Meanwhile, the suspect remains on the run. The suspect's vehicle was described as either a Nissan 350Z or an Infinity G35.

Lawrence's family hopes someone comes forward with any information.

"If it was an accident or not, you running away is a coward," said the father. "A plain old coward, and I don't know if [the suspect] has kids ... you should know how we feel, and you shouldn't have ran."