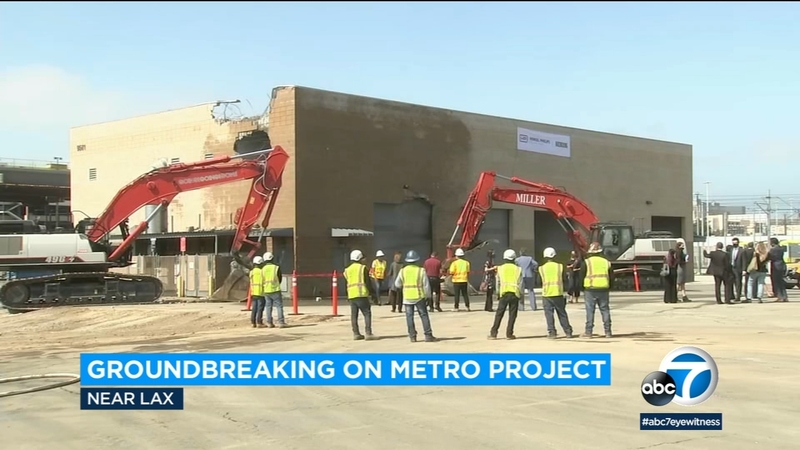 LOS ANGELES (KABC) -- The Los Angeles County Metropolitan Transportation Authority on Monday broke ground on a long-awaited project that will eventually mobilize travelers to and from LAX with much more ease.

The nearly $900 million project will connect the airport to the Metro system, along with other convenient ways to get around, by linking the almost-completed Metro Crenshaw/LAX line to the airport's currently-under-construction Automated People Mover that connects directly with airport terminals.

"We are finally here to bring a train to the planes ... Angelenos have literally been waiting for this their entire lives," Mayor Eric Garcetti said.

The Airport Metro Connector Project is expected to be completed by late 2024, four years before the 2028 Summer Olympics will take place in L.A.

"This won't just be the site of our new Crenshaw/LAX line station. We're going to have a bus plaza here, with electric bus charging stations, because by 2030 all Metro buses will be electric and emissions free," Garcetti said at the groundbreaking ceremony. "We'll have a dedicated drop off area here so you never have to go into that horseshoe unless you really want to see the theme building."

Garcetti added the location will also have a bicycle hub in an effort to make the airport accessible by as many modes of transportation as possible.

The connector station, which will be called the Aviation/96th Street Station, will also have an L.A. Metro customer service center, interactive information kiosks, public restrooms and commercial space.

"This is one of many projects that Measure M -- the largest transportation initiative at the local level in American history times two -- is doing throughout our county, including 15 transit lines that are either extending or building new, including the Crenshaw/LAX Line that will connect here and that will open very soon," Garcetti said.

He added that the Metro Airport Connector project is one of 28 projects that the city is fast-tracking to be open by the 2028 Olympics.