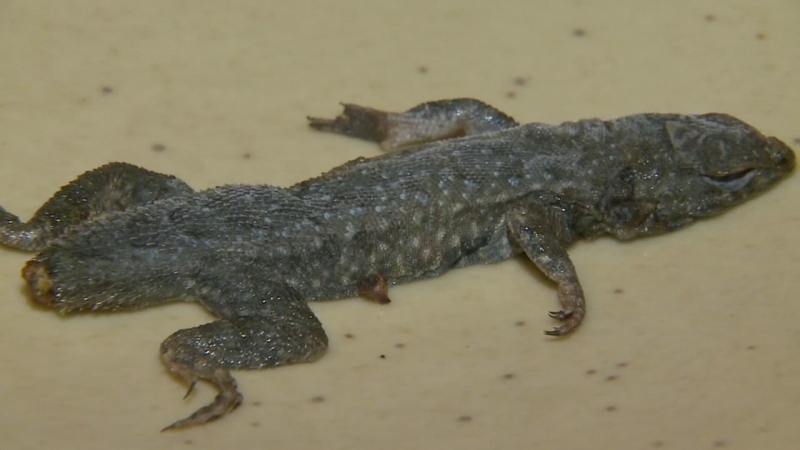 KITTERY, Maine -- A Maine woman said she found a 3-inch long lizard in a bag of prepackaged bag of lettuce.

Michelle Carr, of Kittery, said she doesn't normally shop at the Shaw's, or buy prepackaged lettuce, and she probably never will again.

"It was disgusting. It was a shock. I immediately started to retch,"Carr told WMUR. Carr said she washed the romaine lettuce last week and used it to make a salad.

"I put my fork into my salad after a couple of bites and realized that my fork was not in an avocado slice," she said. "It was a lizard."

The reptile was dead and was missing its tail.

"There's no way to know whether or not I actually ingested the tail or not," Carr said.

Carr said her friend, a New Hampshire-based biologist, identified it as a blue-bellied lizard from California.

"How could this happen?" she said. "The first time and only time I've ever bought a bag of prepackaged lettuce, this happens. Go figure."

Carr, a nurse, has a newborn son whom she is breast-feeding. She is concerned about salmonella and E. coli exposure for her and her baby.

Carr said she has contacted the New Hampshire Department of Health and Human Services, the Food and Drug Administration and Shaw's, but said she's still waiting for more answers.
A spokesperson for Shaw's said the company is working with the lettuce supplier to figure out why this happened and how to prevent it.

DHHS said the case falls outside its jurisdiction because the lettuce was packaged outside the state, but confirmed that the FDA is investigating the incident.

Carr hopes others will learn from this incident, watch what they buy and know where it comes from.