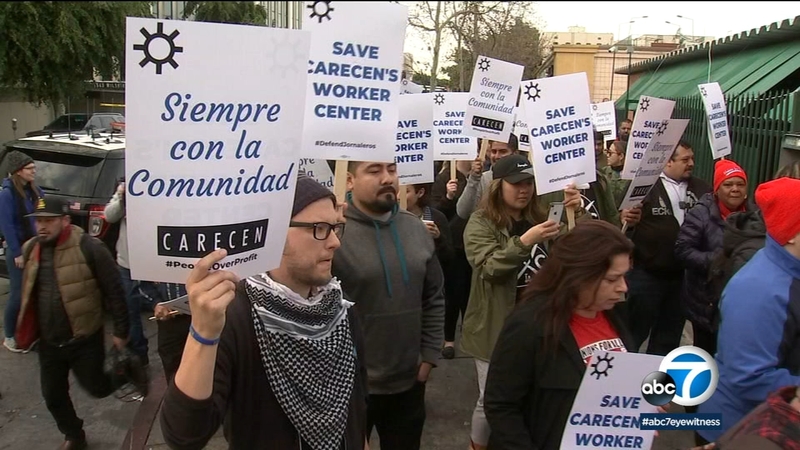 The day laborers gather daily near the CARECEN office on Wilshire Boulevard for help in finding work. The center, established 15 years ago, connects businesses and homeowners with the skilled workers, ensuring fair wages and good working conditions.

CARECEN's Martha Arevalo said the center has been unfairly targeted by the property owner, Wilshire Union, after being told to vacate by Friday.

"We're going to walk in front of Home Depot and we're going to claim our space - this is our space," Arevalo told supporters at Friday's rally.

In a letter sent by the property owner's law firm to CARECEN, dated Dec. 17, the center has become "a nuisance and a blight," attorney Geoffrey M. Gold stated.

In the same letter to CARECEN, Gold stated the labor center has operated on the property free of charge since it was built in 2000. In its argument to vacate, Gold cites "increased criminal and hostile conduct among individuals who appear to be applicants" of the labor center and alleges "illegal alcohol and drug use, public urination, vandalism and theft."

Saying their workers have been mischaracterized as criminals, Arevalo describes the eviction notice as a "cruel attempt" by the property owner.

Arevalo said the center has no plans on leaving its location.

While holding signs and chanting outside stores like Home Depot, CARECEN is calling on the city of Los Angeles and its allies to defend the work they do.

"They create jobs, they generate business, they are an economic driving force for this community, they're clients of all of these businesses," said Arevalo.

The law firm representing the property issued the following statement:

"The way the day laborer center has been managed by CARECEN... has threatened the safety and welfare of day laborers and those who visit and work at the Property.