3-year-old girl, dad honored at Long Beach vigil after being killed when truck slams into apartment 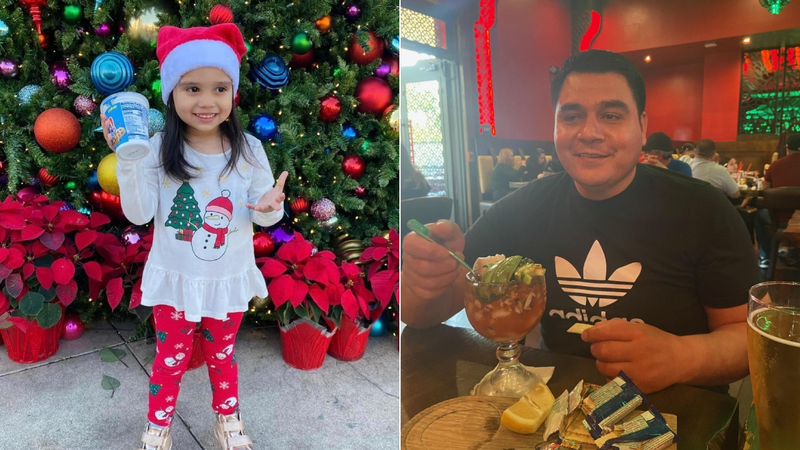 LONG BEACH, Calif. (KABC) -- An emotional vigil Wednesday evening honored a 3-year-old Long Beach girl and her father, who were killed when the hit-and-run driver of a pickup truck slammed into their apartment.

Shortly before the crash Tuesday, surveillance video captured the 2014 Dodge Ram speeding northbound in the 6600 block of Rose Avenue about 10:20 p.m.

The footage shows the vehicle plowing into the apartment, where 42-year-old Jose Palacios and his daughter Samantha were sleeping.

Speaking at the candlelight memorial, Francisco Ramirez said Palacios would go to work every day and come home to take care of his family.

"Samantha was a beautiful girl. My little baby, too," Ramirez said, his voice choked with emotion. "'My Tio Pancho' -- she used to call me like that. That's OK. Stay in my heart," he said, patting his chest with his hand.

Jose Palacios' wife and 15-year-old son were also home at the time of the crash but escaped injury. They want the driver, who fled the scene on foot and is described only as a man in his early 20s, to turn himself in.
EMBED More News Videos

A father and his 3-year-old daughter were killed after a pickup truck slammed into an apartment building in Long Beach Tuesday night.

Firefighters responded about 10:20 p.m. Tuesday after the truck hit the building, according to the Long Beach Police Department.

Jose Palacios was pronounced dead at the scene and Samantha was taken to the hospital, but she succumbed to her injuries.

"It literally looked like a hurricane just came through and destroyed everything," said Mohd Khatatba, a neighbor who said he helped pull the girl and the father out from under the truck. "The father was underneath the truck with a bunch of rubble and stuff on top of him, and then a mattress and then you have the daughter, and then you have more rubble on top of her," Khatatba said.

Khatatba said he heard a loud sound and saw smoke outside his window. When he discovered the crash he said he jumped into action with six others, trying to save the father and his daughter.

Meanwhile, the family has set up a GoFundMe to help with expenses.