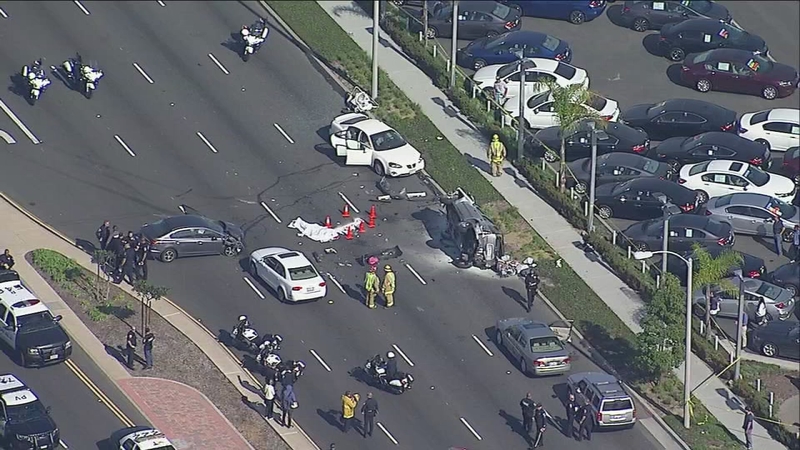 1 killed, another injured in 5-car crash in Torrance

TORRANCE (KABC) -- An unlicensed 19-year-old Long Beach man has been charged with manslaughter and other charges for a hit-and-run crash that killed a passenger in his SUV and injured another person in Torrance earlier this week, officials said.

Additionally, a 19-year-old Los Angeles woman was charged with felony accessory after the fact to vehicular manslaughter, according to the Los Angeles County District Attorney's Office.

Monte Lashawn Collins, 19, of Long Beach, is facing multiple charges in connection with the crash near Del Amo and Hawthorne boulevards that occurred around 10:20 a.m. Tuesday in Torrance.

Officials allege Collins was driving fast on Hawthorne Boulevard, weaving in-and-out of traffic before sideswiping a vehicle and crossing the center median into oncoming traffic. His 2004 Chevrolet SUV crashed into two other vehicles and then rolled over, ejecting his front seat passenger.

The passenger, George Spencer Jackson, 20, died from his injuries.

Authorities say Collins and a woman in the car fled after the crash, but were taken into custody a short distance from the accident scene. Another passenger remained trapped in the SUV and was freed with the help of bystanders.

The charges against Collins include: one felony count of vehicular manslaughter with gross negligence, two felony counts of hit-and-run driving resulting in injury. He is also facing five misdemeanor counts of hit-and-run driving resulting in property damage and one misdemeanor count of driving a motor vehicle without a valid driver's license.

Karin Taylor Dixson, 19, of Los Angeles is charged with one felony count of accessory after the fact to a vehicular manslaughter. Officials say she was a passenger in Collins' vehicle and fled after the crash.