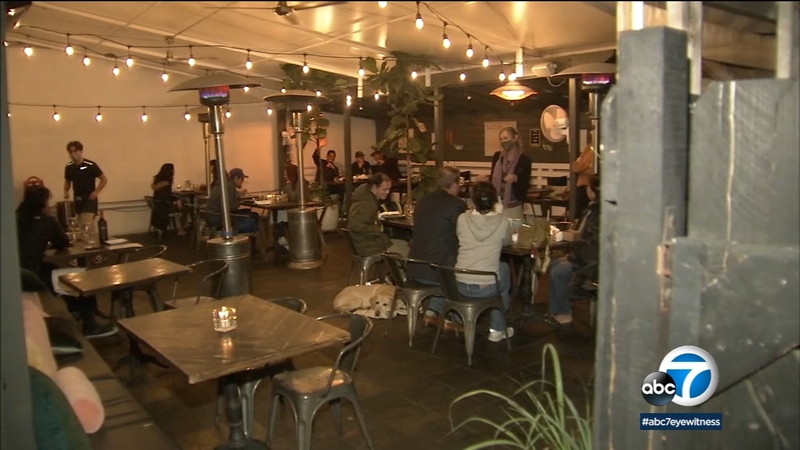 LONG BEACH, Calif. (KABC) -- California health officials lifted the statewide regional stay-at-home order Monday, which comes as a huge relief to restaurant owners who are struggling to stay afloat after the original restrictions went into effect nearly two months ago.

In a press release, health officials said the four-week projection for ICU capacity in the three regions were expected to reach above 15%. A majority of the counties in the three regions will return to the purple tier in Gov. Gavin Newsom's color-coded tier system, which while less restrictive than the stay-at-home order, still requires non-essential businesses to close and restaurants to serve outdoors only.

But some restaurants, like Restauration in Long Beach, ignored the rules and continued to serve food outside.

The owner says she has received nine citations and four misdemeanors for defying the city's safer-at-home orders, but her patio has remained open.

"I knew it was gonna be a tough decision when I started it, I just didn't realize how big it was going to get," said owner Dana Tanner. "I was just trying to literally serve people, make food and create jobs."

The restaurant's gas was shut off on Saturday, but workers returned after receiving complaints about the smell of gas.

City officials say Restauration's gas had been illegally hooked up and it was disconnected a second time.
"It's turned into what it is, with the misdemeanors and the citations," Tanner said.

While Tanner was going against the rules to stay in business, the owner of the historic Long Beach bar Thirsty Isle has been struggling to survive, selling the bar's extensive memorabilia collection to pay the bills.

"I'm hoping to raise enough to pay the rent. The landlord is going to give me a certain amount of time after COVID is done," said owner James DeBois. "We haven't been able to pay anything because we've had no income, so I'd like to get some of the rent paid so they don't throw us out."

Thirsty Isle has been shutdown for months because of the pandemic. Debois says the bar has followed all of the rules, but he has run out of money to keep his staff employed and needs government help.

"I have employees that are loyal that have been with me a long time that still want to come back. They're living like in their cars in Riverside, one's in Bakersfield, they're living wherever they can now," he said.