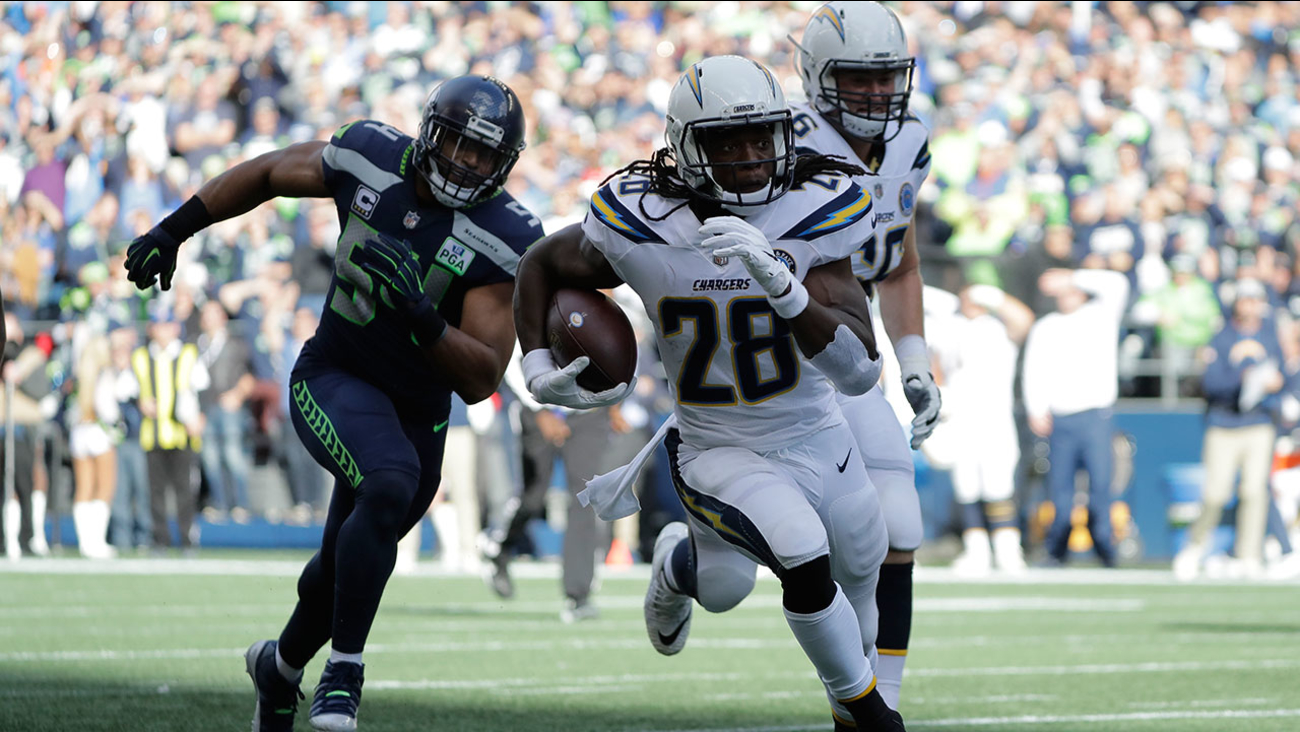 The LA Chargers' Melvin Gordon runs for a touchdown against the Seahawks, Sunday, Nov. 4, 2018, in Seattle. (AP Photo/Ted S. Warren)

SEATTLE -- Philip Rivers made his 200th consecutive start and kept the Los Angeles Chargers surging at the midpoint of the season, surviving a late rally by Seattle's Russell Wilson.

Rivers threw for 228 yards and two touchdowns, Melvin Gordon added 113 yards rushing and the Chargers won their fifth straight with a 25-17 win over the Seahawks on Sunday.

Rivers threw touchdown passes of 12 yards to Tyrell Williams and 30 yards to Mike Williams, and let the Chargers defense stymie Russell Wilson until the final minutes. Seattle had won four of five following a 0-2 start.

Desmond King provided the deciding points for Los Angeles (6-2) by stepping in front of Wilson's pass for David Moore and returning it 42 yards for a touchdown with 6:44 remaining to give the Chargers a 25-10 lead.

Wilson hit Nick Vannett on a 6-yard TD with 1:50 remaining to cut the Chargers' lead to one score. Seattle got the ball back with 1:24 left at its own 22 and after two completions and a roughing the passer penalty on Melvin Ingram, the Seahawks were at the Chargers 44 with 50 seconds left. Wilson scrambled for 16 yards to the Chargers 28 and, after a spike, Seattle had 30 seconds left.

Seattle (4-4) got a break when Michael Davis was called for pass interference in the end zone on the final play of regulation against Tyler Lockett, putting the ball at the 1 for an untimed down. Seattle's J.R. Sweezy was called for false start backing the play up to the 6, and Wilson's final attempt for David Moore in the back of the end zone was partially tipped by Jahleel Addae and fell incomplete.

Rivers became the fourth quarterback in league history to start 200 straight games, joining Brett Favre, Eli Manning and Peyton Manning. Favre started an NFL-record 297 straight times in the regular season. This wasn't like his 2010 performance in Seattle when Rivers threw for 455 yards, but he made key throws at important times, especially in the first half. The Chargers averaged 10 yards per play in the first half and scored touchdowns on three of their five possessions, the last one taking just 55 seconds to find the end zone on a 30-yard catch-and-run by Mike Williams.

Gordon averaged 7.1 yards per carry and ran through huge holes in the second half. His 34-yard touchdown run early in the second quarter gave him 34 TDs in his past 36 games after going scoreless in his first 14 games.