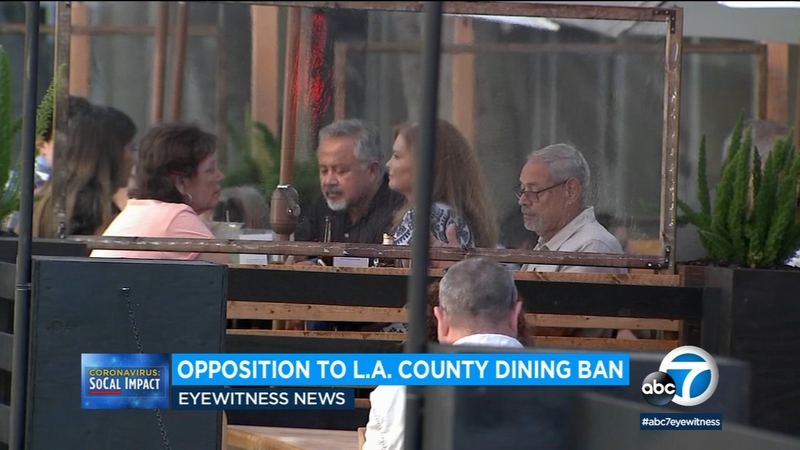 LOS ANGELES (KABC) -- As Los Angeles County prepares to shut down outdoor dining for restaurants, Supervisor Kathryn Barger is speaking out against the order while many business owners fear they may have to permanently close.

"Businesses throughout the County have invested thousands of dollars to ensure safety for their employees and customers only to be punished for the recent surge they have done everything in their power to prevent," Barger said in a statement.

Barger says the data shows the increased case count is not coming from businesses reopening, but from large gatherings where people are not wearing masks.

RELATED: LA County to shut down all dining Wednesday amid COVID-19 surge

Barger cited estimates by the Los Angeles Economic Development Corporation that approximately 700,000 food industry jobs could be lost, with 75% of those losses affecting workers earning $50,000 or less annually.

Officials say the new rules announced Sunday will be in effect for at least three weeks starting Wednesday at 10 p.m.

The L.A. County Public Health Department announced that outdoor dining at restaurants has to stop because of the latest surge in coronavirus cases. The order also impacts breweries, wineries and bars. The establishments will only be able to offer takeout, drive-thru and delivery services.

With new restaurant restrictions set to take effect this week, Los Angeles County is once again breaking its own record for the highest number of new coronavirus cases reported in a day.

It is devastating news for restaurants struggling to stay afloat amid the pandemic.

"How are we supposed to survive now?" asks Joey Kouchkian, owner of Cafe of Lemon in Monrovia.

His business opened in February. It shut down in March and reopened after the owner spent $5,000 building the outdoor patio.

"It's just been devastating, now we gotta close the outside," said Kouchkian. "We're gonna have to tell 11 of our employees to go home, and how are they gonna pay their bills?"

"The recent order with no stated scientific basis from L.A. County singles out a specific industry and could jeopardize thousands of jobs,'' Jot Condie, president/CEO of the California Restaurant Association, said in a statement announcing the legal challenge. "There are thousands of restaurants and many thousands more employees who could be out on the street right before the holiday season.''

Attorneys for the Restaurant Association asked a judge Tuesday morning for a restraining order preventing the ban from taking effect, but it request was rejected. The lawsuit, however, will proceed.

Association attorney Dennis Ellis told reporters he was disappointed in the ruling, but said the organization hasn't seen any evidence that outdoor dining -- which was already restricted to half of overall capacity last week -- has fueled the coronavirus surge.

"We have not been able to see what the county has to support the notion that outdoor dining at 50% capacity, consistent with what the governor has authorized in his blueprint, is inappropriate and needs to be shut down,'' Ellis said.

The Derby has been a tradition in Arcadia for 98 years. They always have a big Thanksgiving dinner. This year they had 300 reservations. They planned on having the dinners at an outside patio, but that is now canceled.

The Derby's general manager says they have followed the rules but the county at times has been inconsistent.

"We had the health department in the other day. It was very unclear, even the guidelines that they changed and they had no idea what was going on," general manager Tyler Zikuski said. "I asked specific questions and they said 'Well, this is how we're interpreting these rules as of now.'"